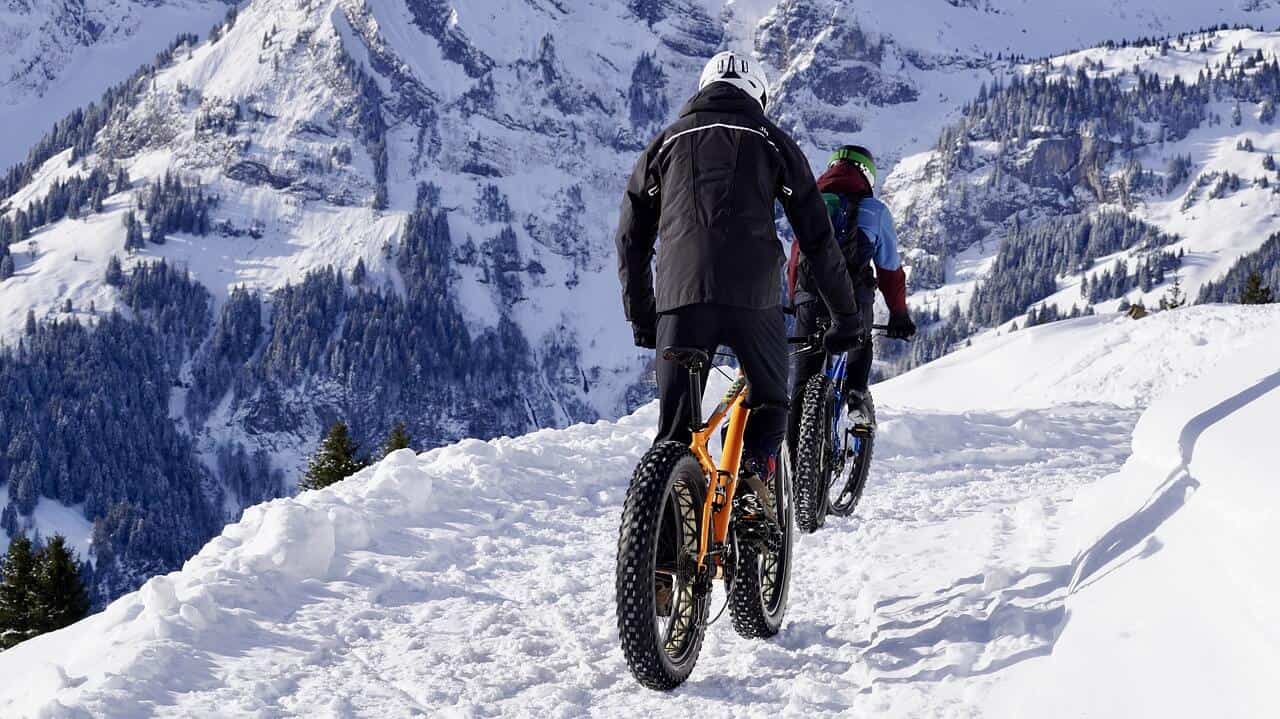 With Summer in full bloom, you may be dusting off your old bike and inflating those rubbery tires. Well sure, you could do that, or you could make this season of riding memorable with a fatbike (aka fat bike). What is a fat bike, you ask?

A fat bike is a type of bicycle designed for off-roading. It earns its name because the tires are quite large or fat. Tires must be three inches or bigger. Fat bikes also have wide rims so they can handle various terrains like mud, sand, and snow. A popular nickname among riders is Fatty!

If you’re thinking of upgrading your tired old bike to something a little more exciting, we implore you to read on. In this introductory article, we’ll delve into all things fatbike: their history, their design, and where you can get one.

What Is a Fat bike? 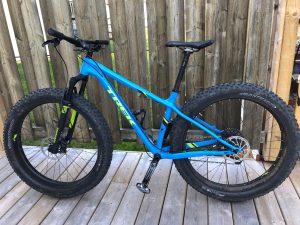 As we touched on in the intro, a fat bike gets its name from its tire size. These are bigger and thus fatter than the tires of an average bicycle.

Most fat bike tires are between 3.8 inches and 5 inches. This is one part of a fat bike’s design that lends these bicycles the ability to traverse a variety of terrain.

Another great design element for offroading in the size of the fatbike’s rims. These are wider to decrease ground pressure as low as possible.

Most fat bike rims are a little more than two inches or 55 millimeters. Due to the wider rims of fat bikes, they need to have stays and forks that are just as wide.

When filling the tires of your fat bike, it’s better to keep the pressure far lower than what you’re used to. Don’t exceed much past 10 pounds per square inch or PSI.

In fact, some riders have found that a tire pressure of 5 PSI is suitable for specific conditions. Fatbikes can also handle tougher terrain like mountain biking trails and pavement.

The History of the Fat bike? 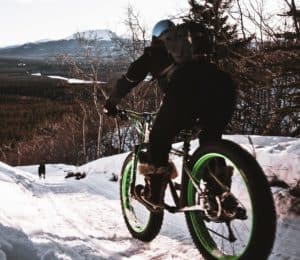 Where exactly did fat bikes come from? They are a newer creation that has been around since the 1980s. That said, the groundwork for creating the fat bikes we know and love today may have existed for some time at the start of the 1900s.

Jean Naud of France designed a longtail bike in 1980 that had strikingly large tires. The idea caught on to the point that tire brand Michelin made their own fat bike tires for Naud to use as he rode his bike long distances.

While Naud may have technically had one of the first fat bikes, they weren’t available to the public yet. That would come later.

Two places in the United States progressed the progress of these bikes: New Mexico and Alaska.

In New Mexico, a man named Roy Molina created his own version of a fat bike, which had tires that were 3.5 inches and rims that were a little more than three inches.

Over in Alaska, Icycle Bicycles’ Steve Baker made another version of a fat bike by welding it. These bikes were lent to cyclists, who rode them to such places as the Iditarod Trail.

By the 1990s, John Evingson and Mark Gronewald, both of Alaska, made their first fat bike together. It had the same tires and rims that Alaska’s Roy Molina had designed.

Gronewald was actually the one who came up with the “fat bike” term way back in 2001. These bikes began selling, and fat bikes took off from there.

What Are the Benefits of This Type of Bike?

Are you thinking of getting into fat biking yourself? It turns out there are many benefits to doing so. Here’s an overview of the perks of the lifestyle.

Have you ridden all the bike trails in your city or town…several times over? If so, then by this point, hitting one of these trails is so ingrained in you that you can almost ride it with your eyes closed (although we don’t recommend doing this, obviously!). You can’t help but be a little bored.

With fat biking, you don’t have to ride that same boring path for the twentieth or even hundredth time. You can explore something new by taking that rock or dirt trail you’ve always seen but could never ride before.

Why not forge your own path while you’re at it? Take this trail as far as it goes and see where you are when you get there. Just be careful not to get too lost on your adventures. (Source)

See Nature in a New Way 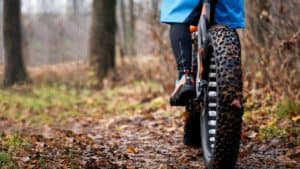 There’s something about riding off-road that really gives you a fresh appreciation for Mother Nature and all her bountiful gifts.

For instance, have you ever ridden your bike in the snow before? Probably not, right? After all, why would you? Traditional bikes aren’t meant for handling such slick conditions, but a fat bike can.

There’s something so mystifying and magical about cutting through a thick blanket of fluffy snow that was previously untouched. The crispness of the winter scene, the snow lingering beautifully in the tree branches, and the stillness of the world around you is something that has to be seen and experienced to really believe.

Get Some Great Exercise

Whether you want to lose some weight or find an alternative to the gym, a fat bike is a great option either way. According to Bicycling.com, if you ride for an hour, you can torch 1,500 calories.

Not only that but if you wanted to do the same thing tomorrow, you theoretically could. That’s because Bicycling.com adds, your body enters recovery mode right away after a fat biking session. You’ll be ready to go after 60 minutes of fat biking sooner than you would if you spent that same amount of time running.

This is all due to how your body bears weight when you do certain activities. Fatbiking is not a weight-bearing activity, even though you must be strong and have great balance when riding. Running is, which is why recovery takes longer. (Source)

The fat bike community is full of passionate riders like you. You don’t have to live in Alaska to find someone who likes this hobby as much as you do, either. If you hang around specialty bike shops, you’re sure to bump into another fat bike enthusiast.

You can always use social media to connect with other fat biking fans as well. There you can meet up and ride together! Your new friends could introduce you to trails you’ve never even heard of.

The average tire pressure for a traditional mountain or city bicycle is between 30 PSI to 130 PSI. For fat bikes, it’s as low as 2 PSI and as high as 10+ PSI. That’s it. With such low tire pressure, you don’t need to worry about refilling nearly as often as traditional bike riders do.

Sometimes you will exceed 10 PSI, but it depends on the conditions. If you’re riding rocky terrain, for example, you could increase the tire pressure to 14 PSI with no ill effects.

Just don’t go too high or else you’ll bounce as you ride. This can be dangerous, depending on the terrain. A PSI that’s too low can also bounce, so test and experiment until you find a comfortable tire pressure that doesn’t cause you to bounce.

Looking to buy a fat bike? You should consider any of these brands:

The Farley fat bike is the best-known offering from Trek. New for 2022 is the Farley 9.6. This includes carbon wheels and a carbon fork. It retails for about $5,200. If you don’t want to spend that much then you can opt for the Farley 5 coming at under $2000.

If you’re shopping Salsa, there are plenty of great fat bikes, but the Beargrease Carbon X01 Eagle comes up again and again as a favorite. This model has four-inch tires and costs roughly $5,600.

The fun-named Ice Cream Truck from Surly is a more economic option at $2,000. It boasts tires up to five inches.

Another great fat bike brand is Rocky Mountain Bikes. Their 2022 Blizzard is intended for all sorts of riding conditions, including sand and snow as well as mountain bike trails. The starting price is $2,400.

Fat bike fans give the LES Fat from Pivot plenty of acclaim. With multiple speeds, a chainstay length you can alter, and a full carbon frame, this bike looks as nice as it rides. Pricing starts at $4,300, and bikes are customizable.\

If you’re looking for a fat bike on a budget, look no further than Framed Bikes. Their Minnesota fat bike costs just $800. It doesn’t skimp on features, either, boasting Avid bb5 disc brakes and a Sram X5 drivetrain.

A fat bike is a type of bicycle with tires that are bigger than three inches. They have wide rims to match. With low tire pressure to boot, fat bikes are the perfect choice for riding in softer, off-road terrain like sand or snow.

Now that you’re more familiarized with fat bikes, we hope you’ll consider one of these awesome bicycles for yourself!

link to Why Are Gravel Bikes So Expensive?

Continue Reading
link to Is Cycling Bad For Knees? Might Be Surprised With The Answer!