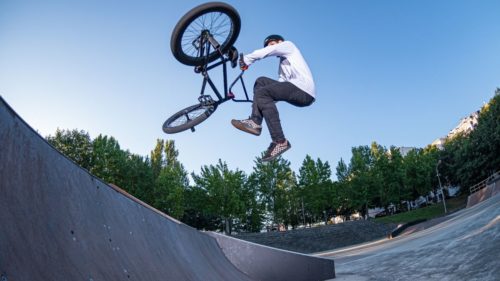 BMX bikes, which are short for bicycle MotoCross, are for off-road racing, tricks, and more. They are lightweight, easy to take anywhere, and enjoyable for riders of all ages.

Young children can enjoy them at a local bike park, but there are professional BMX riders testing the limits as well.

One of the most common questions people have about BMX bikes is whether or not they have gears. While they are not meant to do any type of extensive riding around, being able to tackle any type of incline is difficult without gears. It’s something that a lot of shoppers will consider before making investment.

Do BMX Bikes Have Gears? 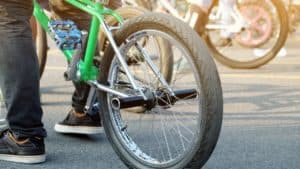 The reason why BMX started to create smaller gearing for their bikes is to make the ride a little more easy and smooth for all types of riders. There are multiple gearings that are dependent on the gear inches, gain ratios, roll-outs, and sprockets.

As far as the traditional method of changing gears because of incline, those are not typically found on BMX bikes. These bikes are kept simple near the handlebars for added maneuverability and durability.

What Are All The Available Gear Ratios For BMX Bikes?

BMX bikes will have sprockets not only in the front beside the pedals and cassettes, but a set of cogs in the rear wheel as well.

Together, they work to help the wheels rotate as efficiently as possible. That means that BMX bikes will have two different gears for riders to switch between.

How To Determine The BMX Gear Ratio On A Bike 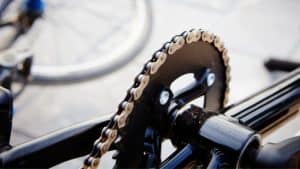 Figuring out what gear ratio is best is mostly trial and air. There are recommendations out there all the time based on a person’s build, but every person has slightly different comfortability.

If the wheels are bigger, that usually means that there will be a greater amount of teeth.

What Are The Most Common Gear Ratios For BMX Adult Rider?

Looking for a place to start with gear ratios on a BMX bike? These three are among the most popular.

With 55 gear inches, this gear ratio is mostly found with older BMX bikes. They have bigger wheels, which makes them enticing for some riders out there.

A lot of people like this gear ratio, which equates to roughly 2.78/1. If the ratio is smaller, it is better for the bike overall. That’s because smaller gears will make it easier for a rider to pedal and move the bike the way they want to.

This is another popular solution for a lot of riders willing to put in the effort to get something right down the middle. It equates to 2.73/1, which is well below 2.8/1. The bike is lightweight and easy to maneuver, and most will be very satisfied.

Are There Different Types Of BMX Bikes?

Generally speaking, there are three types of BMX bikes for shoppers to consider. While they are variations within these groups, this is a great starting point for anyone looking to get into it.

When BMX bikes first started taking off in the 1960s and 1970s, this is what a BMX bike looked like. The gear ratio was around 2.81/1, and really liked for its overall versatility.

Racers try to stay away from freestyle BMX bikes. Instead, they are mostly for riding on flat surfaces and taking them to skate parks.

This was developed in large part because of how popular BMX bikes started to become. Companies knew that they wanted to really capitalize all of this, and that’s when they started to pour in the extra amount of money.

With a freestyle BMX bike, the gear ratio is right around 2.8/1. With the gear system, the front sprocket is bigger, while the rear sprocket is a little bit smaller. It’s in order to keep things simple, as fewer turnovers mean a better and more efficient pedal.

As the name implies, a Jump BMX bike is all about focusing on those challenging jumps while riding. They are designed to be very lightweight, and lifting them at any time helps out a lot.

The ratio for a jump bike should be 2.8/1 to make it easy to maneuver. Too many people don’t take the time to get a jump BMX bike setup like that, and they find it to be a little more challenging than they would like.

Are People Switching Gears Traditionally With a BMX Bike? 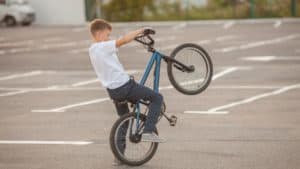 Even if there are multiple gears on a BMX bike, they are not switching them the traditional way. Most of the time, people will set it to one gear and go from there.

That’s good news for a lot of riders, because the last thing they want to do is deal with making switches when in the middle of a ride.

The traditional setup will just not work with a BMX bike, as the setup is slightly different. Switching gears while approaching a jump of some sort it’s just not going to fit in with the overall way of riding.

What Type of Sizes Are There For BMX Bikes?

Since BMX bikes are the simplest about bikes, they have a pretty simple sizing method as well. It basically starts at micro-frame size, and goes all the way up to a Pro XXL.

There are ways to adjust even the Pro XXL for bigger riders, but since they are small bikes in general, taller athletes usually stay away from BMX biking in general.

There are plenty of BMX bike brands out there, but a few of the popular options include Mongoose, Diamondback, Haro, and Kink.

They all bring something different to the table, but at the same time, their bikes for the same type of format.

They offer gearing that is pretty much the same, and switching gears is not thought of as a process that a lot of people want to deal with.

When Riding, Do BMX Riders Mostly Stick To One Gear?

Indeed, most BMX bikes can just have one active gear, which is generally fine by the majority of riders. Not only does it reduce the weight of the BMX bike since there is not a lot that goes into switching gears, but it makes it less complicated in general.

Riders can simply get out of their saddle if they want to pedal as hard as possible and pick up the pace. Most of the time, the goal with BMX bikes is not to go as fast as possible, but to have a controlled ride in a smaller setting.

The good thing about a BMX bike is that they are extremely durable no matter where they go. Riders will find me pretty easy to go wherever they want, whenever they want.

They are compact and ready to take impact, especially ones designed for a lot of jumping. Whenever someone jumps with a bike, there’s always a chance of having a crash.

But no one would invest a BMX bike if they’re constantly crashing and putting themselves in a vulnerable situation.

With that said, it’s essential to realize that BMX bikes are not indestructible, but they are certainly stronger than the average bike out there. Too many people feel like they have to baby their BMX bike, but that’s not the case at all.

Are BMX Bikes Good For Other Types Of Riding?

Since BMX bikes are so specific to their discipline, they’re not really used for other types of rides. For example, a BMX bike is a terrible road bike, as it is not going to go fast at all.

Pedaling efficiency is terrible, the geometry is way off, and many other limitations hold people mack. It does a little bit better as a makeshift mountain bike, but again, the lack of gears makes it impossible to make it worthwhile.

The Final Word On BMX Gearing

The traditional way of thinking about gears is simply not there with BMX bikes. Most riders who use BMX bikes are very well aware of this, and they don’t seem to miss them at all.

It might seem a little bit different at first, but making adjustments is fairly easy. While there is no way to make those adjustments on the fly, getting a BMX bike with the right setup is still important from the jump.