Gravel bikes have exploded in popularity over the last few years, and more and more people are looking into investing in their first one all the time. You’re probably asking yourself when shopping around, why are gravel bikes so expensive? It seems like a great, versatile option that a lot of riders can enjoy, which makes them pretty valuable in general.

Why are gravel bikes so expensive? One thing that will make gravel bikes an expensive bike to own is the availability on them. Supplies are low and demand is high which will make retailers less incline to put them on sale. The components on a lot of them are high quality and account for most of the bikes cost!

One of the biggest things that are holding some shoppers back is the fact that gravel bikes are pretty expensive right now compared to alternatives.

What makes a gravel bike such an expensive investment compared to so many other bikes that are out there? We take a closer look at why the cost is so high for gravel bikes at this moment.

While things can change in the next few years, it’s still sometimes hard to justify the prices where they currently stand. 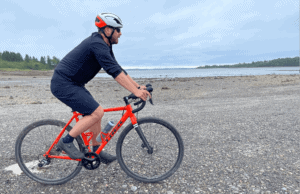 The gravel bike niche is still growing, as it didn’t even exist a few years ago. Since this is a very specific type of bike that is different from the traditional categories, not every company makes a true gravel bike.

That means availability is always low, and competition doesn’t dictate the price the way it should in the biking industry.

Prices have started to decrease with more companies joining the trend, but there are still years before any type of major impact is possible with gravel bikes.

It’s still very much a specialty product when looking at bikes from a general perspective. Companies can’t justify upping the quantity too much at this point.

Availability for the best gravel bikes out there can also be frustrating because they sell out so quickly. The process of developing and producing bikes is still something that takes a while, so people need to realize that and be as patient as possible.

With high demand and a selection that is still growing, it leads to higher prices.

Every few years, there’s new technology in the cycling industry that people seem to gravitate toward. A lot of times, they are mostly beginners that start to look into what is currently trending, and then perhaps make a rash decision instead of thinking things through.

It is true that there are plenty of people who can benefit from a gravel bike. That’s not taking anything away from them, as they are designed for those types of riders for a reason.

However, a lot of people are buying a gravel bike when a road bike or mountain bike could do. This is where people are getting themselves in trouble because they are paying a premium price for what is considered hot right now.

The only people who should be investing the extra bit of money into gravel biking should be those who know exactly what they are benefiting from.

If a very inexpensive beginner mountain bike makes more sense, there’s no shame in spending half the price for something like that.

In the end, most people are going to upgrade their bike if they really get into it anyway, so there’s no need to invest in an entry-level gravel bike that still will eventually need to be replaced.

The hydraulic disc brakes used on gravel bikes are expensive by themselves, but having integrated levers takes things to another level.

This is one of the main reasons why gravel bikes jump up in price, as these aren’t easy to put together. In order for the gravel bike to work as it should, it needs to have these features, which is why it’s impossible to offer anything cheaper that is still considered a gravel bike.

People shopping for a gravel bike might not realize just how much just makes the price jump in general.

There are way too many people who scoff at the idea of spending so much money on a bike, but hydraulic brakes are pretty much a necessity for any gravel bike that is out there right now.

In order to compete with everyone else, they need to be there. These are not the only high-end components, but speaking of which…

One of the beauties of investing in a mountain bike is making upgrades along the way to fit what a rider might really want.

It’s great to have those customization options, but all of a sudden, that mountain bike that was cheap is much more expensive when adding everything up.

A lot of the price is upfront for a gravel bike, as upgrades aren’t nearly as necessary. They are billed as bikes that are 100% ready to go from the beginning.

Just take a look at a standard gravel bike, and it’s easy to see where some of the prices come from. The materials used for the frame are very expensive, as it usually includes some form of carbon.

Obviously, some gravel bikes are completely carbon, but they all are designed for comfort and durability.

High-end tires and wheels come standard on a gravel bike instead of needing replaced or upgrades. When shoppers are looking for a new gravel bike, they don’t want to have to then go out and make upgrades.

Suspension, the saddle, and gears are always high-end as well. It’s really a matter of looking at a bike like this and realizing that there is no need to make any upgrades after that. This should be good to go right out of the gate, making the price a bit more bearable.

Gravel bikes have a minimalist look to them, and that’s because manufacturers have eliminated some of the extra stuff that gets in the way of other types of bikes (specifically mountain and fat).

That keeps them lightweight and agile, which is perfect for all types of rides. Some people use gravel bikes as a commuter option, while others will use them strictly off-road.

The versatility means that instead of having to buy multiple bikes, this is perfect for everything.

A Few Negatives of Gravel Bikes For Some People

Gravel bikes made seem like a perfect solution for so many different buyers out there, but it’s not a perfect option by any means. There are reasons to stay away, especially for those who might want something a bit more specific for what they plan on doing.

Going off-road usually means that tires get a little wider, but gravel bikes might be a little too wide for some.

The larger tires create a bit more resistance, which slows down riders and can leave some frustrated. For as much as a gravel bike costs, people want to go as fast as they can on all different types of terrain.

These bigger tires are a little heavier and don’t quite knife through certain trails like others. That is not to say that a very skinny tire is going to work either, but there needs to be some level of balance.

Gravel bikes are very specific for a certain type of terrain to really excel, and anything tougher or smoother is going to be different.

Not Great At Anything (Other than Gravel)

The reason that some stay away from gravel bikes and their pretty expensive prices is that it’s decent at many different disciplines, but not superior at anything.

Sure, there are those very light trail rides, and those are specifically what gravel bikes are designed for in the first place.

A lot of people, they are wanting a gravel bike for its versatility. However, while it’s versatile, it’s just slightly slower and less of a standout than other options.

The gravel bike is not going to be able to keep up with a road bike, no matter how hard the rider tries. It’s also not going to handle anything too tough off-road, as that’s what a fat bike and some mountain bikes are for.

The most important thing to remember is to stay within limits with a gravel bike. They are expensive for a reason, so pushing the pace too much and going on extremely challenging trails might damage the investment.

Is A Gravel Bike Worth The Expense?

Until the hype dies down, gravel bikes are going to be on the expensive side. There are just too many factors contributing to the price.

However, are these gravel bikes actually worth it? As long as a person knows what they are getting and what type of riding they plan on doing, and gravel bike can be a perfect solution.

They are made with high quality in mind, so a well-maintained gravel bike can last for years and years without issue. For some, that’s worth the extra cost upfront.

There will eventually be a drop in price for gravel bikes, but pay attention to see if there are any quality drops as well. The last thing people want is a bike that doesn’t live up to the quality that so many people are used to these days.