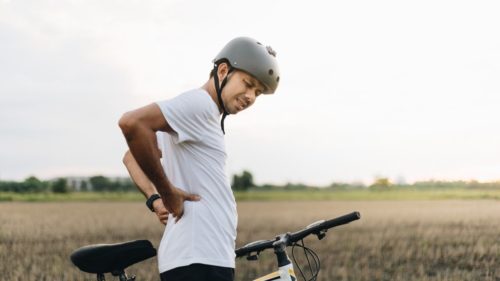 Regularly riding a bike is seen as a fairly easy exercise for people to accomplish. Stress is not put on the body, and any type of cardiovascular workout is going to be helpful for the heart. It is a way to burn calories, get some fresh air, and even socialize when in riding groups.

However, while many have cycled for years, some worry about potential health problems. One problem that pops up pretty regularly is soreness in the back.

Is cycling bad for the back? Cycling is not considered bad for a person’s back. There might be some people who suffer from pain when riding, which usually comes from improper posture. Some doctors even go as far as recommending cycling as an alternative to other sports when a person is dealing with a bad back.

How Cycling Can Help People With Bad Backs

Compared to most other sports out there, cycling does a great job of stabilizing the back as much as possible. While riding along the proper way, there is much less jarring to the spine than a bunch of other sports that people are used to participating in.

Stationary cycling is a little more gentle on the spine, which is why spinning classes have really exploded over the years.

Runners, in particular, like the alternative of cycling if they are dealing with an injury.

How to Reduce The Chances of Back Problems While Riding

Some people inevitably begin facing issues with their back when riding. By being proactive and thinking things through, there are ways to cut down on the chances of having a bad back from this exercise.

The tips below have helped a lot of people in the past, and make a lot of sense when implemented.

Way too many people buy a bike that is not properly fitting them as an individual. There are numerous sizes for bikes, and getting the right size will help cut down on any back issues that might occur.

There are numerous other benefits to getting a properly sized bike beyond helping the back stay as healthy as possible. For example, it helps a lot with pedaling efficiency, taking on more challenging trails, and reducing overall fatigue.

It’s very tempting to buy a used bike or a used one handed down from another individual. However, if the back starts to hurt, it’s very important to spend an extra amount of money to get something that fits properly. The body will be very thankful in the end.

Make Adjustments To The Bike

The sizing doesn’t stop with just getting the right size for a bike. In order to really get things to fit the way they should, making slight adjustments will help out as well. There are certain parts of the bike where it makes particular sense.

The first thing people should adjust after getting the right size is where the seat post is positioned. Not only can it go up and down, but it can even be angled to the point that it relieves stress on the back.

The lower back, in particular, can really start to benefit from these types of changes.

After making a purchase, take the bike out for a short test ride to see how everything is going. That will be a great indicator of what needs adjusted, and what fits perfectly fine.

It’s really hard to judge exactly what all is needed without getting on the bike first and testing things out.

Sloppy form can get a lot of cyclists in trouble if they are not careful. It might seem pretty easy to get on a bike and position just the right way, but people get into bad habits from time to time.

When riding just about any bike, the proper form is to keep the back straight and have the arms slightly bent while riding.

It’s really important to not slouch or hunch while riding, as that’s going to cause a lot of general fatigue. Not only that, but it could start to add up and cause pain for people who are going long distances.

I would not recommend staying in the same position while riding. Make sure to shift positions every once in a while to avoid fatigue, but still keep that main form overall.

A simple way to avoid back pain is to shift into a new position if something feels like it’s putting extra pressure on the back.

Stretch Before and After 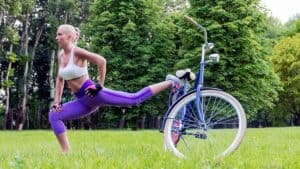 It’s amazing to see that some people don’t stretch before and after riding. Maybe they don’t feel as though it is strenuous enough of an activity to require stretching to get the job done. Whatever the case is, the stretching regimen needs to start sooner rather than later.

Specifically for the back, stretching it out will prevent any hiccups along the way. There’s nothing worse than starting to feel a little bit of pain early on in a ride, and then trying to power through it.

Chances are, it’s not really going to get any better, only loosening up a little bit while still putting some strain on the body.

It’s tempting to just stop everything and not cool down properly after a long ride. Stretching actually helps with flexibility in the future by stretching after a ride on the bike. It doesn’t have to be anything too long, but enough that people notice a difference. (Source)

Whether they are road bikes, mountain bikes, fat bikes, or any other variation for that matter, gears are a big part of navigating.

They help to climb when necessary, but some people don’t utilize them properly. Failure to utilize them is only going to put stress on all parts of the body, including the lower back itself.

The tougher the incline, the more important it is to rely on gears. When gaining that extra amount of strength to get through tough rides, it can be one push too much that hurts a person’s back.

Doesn’t Positioning On A Bike Hurt The Back?

People unfamiliar with riding a bike might initially look at how a person sits on one and think that it would cause back problems.

While it’s true that people don’t normally sit like that anywhere else, the positioning is for a reason. Engineers have reworked how bikes are shaped for years, developing something that is designed to be as safe and comfortable for all. The geometry is 100% on point.

Each type of biking discipline has a slightly different setup. For example, cycling on a road bike involves a much more aggressive position to help with being aerodynamic and comfortable during long rides.

A mountain bike or cruiser bike is much more upright, which is great for beginners who want to feel more relaxed in general. They won’t be going nearly as fast, but it still gets the job done.

Is a Recumbent Bike Better or Worse For The Back? 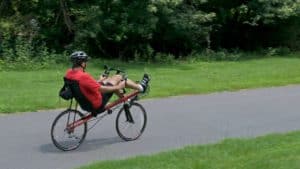 A recumbent bike is another option for those who are suffering from back problems. A lot of older people have gravitated towards these reclining bicycles because they have some sort of lower back pain. Sitting in the reclined position takes some of the pressure off.

This type of bike might not be for everyone, but they are a nice alternative if traditional riding is not working out. It’s just a matter of what a person really wants out of their exercise, and if they are willing to make the investment in a new type of bike.

What Sports Are The Worst For Your Back?

Any type of sport that requires a lot of extension in the back area is generally going to be the worst. Gymnasts and pole vaulters have particularly tough times keeping their backs as healthy as possible. Impact sports like football and wrestling also have their own complications.

The great thing about cycling is that once a person is in position, their back is mostly stable. It only moves around if a rider gets out of the saddle and pushes the pace a bit. This makes it a great sport for limiting back issues.

Why Athletes With A Bad Back Should Try Cycling

To stay active, athletes are always looking for new ways to get the exercise that they want.

Cycling is great for those who have dealt with bad backs in the past, or want to stay healthy right now. Ease into the sport, and it might end up being a lifelong passion.