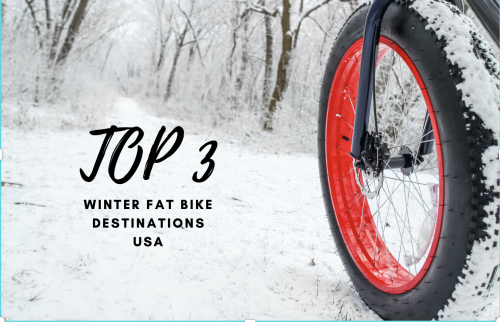 Riding a fat bike in the winter usually involves having some fun in the snow. They are built to handle snow pretty easily, so it makes sense to have some time on trails that would typically not be usable at this time of the year.

While some are fortunate enough to live in cold places that always have plenty of snow, others need to plan a trip to experience the best of the best.

Where are the best places in the United States to ride a fat bike on snow in the winter? Ask ten different fat bike enthusiasts, and there is a chance of getting ten different answers. Instead of narrowing it down to just one, here are three choices in various regions that stand out from the rest.

Ask anyone in Minnesota, and they believe that they are the heart of fat bike riding. It is hard to argue with all the different trails scattered throughout the state, but the heart of it all might just be in Crosby.

Located in the middle of the state, a group of bikers started creating a trail network where old mines used to be. This all happened about ten years ago, as mountain bike and fat bike riding started to really take off. It has now turned into a destination that people from all over the region flock to in the winter.

A great starting trail would be the Galloping Goose (Trail Fork Link), as people can hop on right away and get a feel for the terrain. It is a little bit different riding in the snow, so people doing it for the first time need to be a little cautious at first.

Are you looking for something a little more challenging? There is a trail called Bobsled (TF Link) that is filled with a lot of tricky spots for people to ride. It is one of the more challenging trails out there, so do not take any chances if riding does not seem to come naturally.

Everything is maintained by the Cuyuna Lakes Mountain Bike Crew, and they want to make sure that every person there treats the trails with a lot of respect. They groom 25 miles for riding during the winter, and it takes a lot of hard work to get it just right.

It is a pretty tightknit community, but they are also welcoming to people who come from out of town as long as they show respect. It is not too big of a hike from Minneapolis or Duluth, and most people find it worth the trip in the end.

The state of Vermont has long been a winter sports haven for anyone on the East Coast in the United States. People flock to this region to do anything from standard skiing, all the way to snowmobiling. Fat bike riding has really taken off in the last decade or so, and trails are being built that are 100% dedicated to these riders as well.

In East Burke, the Kingdom Trails Association has put together over 100 miles of trails for anything that is not motorized. This location is open the entire year, but it really starts to bring in visitors when snows on the ground.

The only other type of riders on the trails will be snowshoers, and it is pretty easy to share the entire trail without any issues. Not only are there various challenges on these trails, but the scenery is hard to beat. In fact, it might just be the most beautiful location for fat bike riding out there today on this side of the country.

In order for a location to really be special, it needs to accommodate different types of riders. For beginners, they have easy to read signs so that a person never put themselves in a challenging situation.

For those who really want to challenge, they can ask locals where to get the best type of ride on that day. Depending on the amount of snow, different trails my perform in different ways, so it is not always a given just how challenging certain trails are.

Getting up to Vermont is not particularly challenging for anyone on the East Coast. Whether it is a weekend trip, or something even longer, people can have a great time visiting East Burke and getting a taste for what real riding in the snow feels like.

Anyone who is into mountain bike riding during the summer will instantly recognize this location. The problem is, up until a few years ago, the popularity and general busyness would significantly slow down in the winter months.

That is all changing with the emergence of fat bike riding. A team that is dedicated to making sure that the trails are prepped and ready to go for locals and visitors to the area are growing fat bike riding by the year.

One of the beauties of Crested Butte is that it is a great place to ride a fat bike without any particular rhyme or reason. Some people will just hop on their bike, hit the open trail, and explore the beautiful area. Some of the trails go deep into the country, where people will have an opportunity to really take in nature at its most beautiful in the state of Colorado.

The sport has exploded so much in the area that they actually host the Borealis Fat Bike World Championships each year. The best riders from around the world come in and participate in a race that is starting to gain popularity with spectators as well. While there are competitive riders there at all times, it is very beginner-friendly as well.

The top suggestion for a good trail that is not too challenging is Hartman Rocks. Nearby is Sea and Sage and Rocky Ridge as well. The dirt roads that many mountain bike riders in the summer are familiar with are groomed for the snow when it starts to fall.

Since this is a tourist destination, it is generally easier to rent a bike here than some of the other locations. Those who are serious about fat bike riding probably are planning to bring their own bike, but it is nice to have some solid options available if need be.

Other Outstanding Locations for Fat Bike Riding in the Snow

Narrowing the list down in just three is such a challenge, and there are plenty of hotbeds being completely ignored with a list like this. Just in Colorado alone, there are places such as Vail Valley and Winter Park. In fact, Winter Park is known as the Mountain Bike Capital of the USA, but they are quickly making a case for the fat bike capital as well.

Just north of Colorado is a really good spot called Grand Targhee in Wyoming. To the west of Colorado is Park City, Utah, which is a popular destination for anyone looking to do something in the snow in the winter. This entire mountain region has plenty of hidden gems as well, so it is a great place to target if a couple of areas want to be tried out at once.

In the Midwest, heading to Michigan or Wisconsin is probably the best bet if there is not enough to do in Minnesota. Duluth in Minnesota, Cable in Wisconsin, and Marquette in Michigan are three specific locations that just missed the cut as great places for fat bike riding.

Marquette is one of the most overlooked places in the United States for a lot of different tours attractions, as it is located in the Upper Peninsula. It is truly a winter wonderland for outdoor activities, even if it is a bit of a hassle to get to.

Finally, the East Coast has some decent options, but almost all of them will be located in Vermont. They seem to really embrace that bike riding, and they have the terrain to make some beautiful options. East Burke is great, and so is Barre, Vermont. In Barre people like checking out Mill Stone Hill, a 20-mile challenging trail that is open throughout the year.

Making the Most of a Fat Bike Trip

A destinations trip for fat bike riding can be a fun experience, especially if it is planned correctly. For starters, it is obviously important to make sure that snow is on the ground and the trail is ready to be used. Once that is confirmed, think about if there are any other activities in the area worth checking out. Some people like to make an entire vacation out of it, so do not be afraid to look into that.

For those not all that familiar with riding in cold weather, bring the appropriate clothes so that it is as comfortable as possible. Those were underprepared will be forced to buy stuff when they arrive, and might be a little more expensive there.

Finally, as cliché, as it sounds, try to have as much fun as possible. A lot of fat bike riders in these areas are more than willing to share advice and tips to newcomers. It is still a very niche type of activity, and any chance to grow by meeting new people is a good thing. Who knows, there’s always the opportunity of meeting someone else to go on the next destination fat bike riding trip.