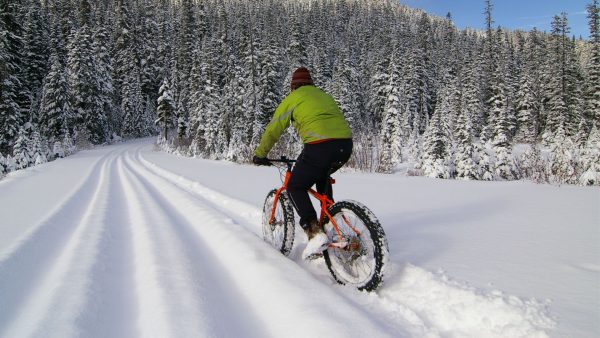 Perhaps the biggest draw to any person considering a fat bike is that it can tackle snow without any issues whatsoever. This makes it a true option for biking at any time of the year, and encourages people to stay fit and also safe on different terrains.

While everyone knows that fat bikes handle a little bit of snow on the ground, just how much can it handle before it becomes too tricky to safely navigate? A lot of it depends on just how well-equipped the fat bike is, but there are some general rules to follow that make it a little safer.

How Much Snow is Too Much For Fat Biking?

The common recommendation is to start taking extra precautions any time snow accumulation is over six inches. It becomes very hard for fat bikes to perform at a high level once the snow gets that high, although it is still possible for experienced riders.

Most look at a foot of snow to be the true tipping point. Unless riders use special shoes, the snow is pre-packed or some other alteration is done, the tires simply won’t have a chance to carve through any type of snow that high.

Ideal Riding Conditions When it Snows

A perfect set up in the winter is only having a fairly light dusting of snow, roughly one inch or less, on the ground. Not only does it make the trail picturesque, but it doesn’t force a person to sacrifice much feel when turning every which way.

It doesn’t take a lot of biking knowledge to understand why a high accumulation of snow is a problem. As the snow starts to pile up, any type of traveling becomes more and more difficult. Vehicles built specifically to handle snowy and icy conditions can struggle with a significant amount of snowfall, so it’s unrealistic to think that a fat bike will be able to navigate when the snow is waist deep or even higher.

The good news is that snow doesn’t stay that high once packed down just a little bit. Even though the initial snowfall might be up to a rider’s knees, it will quickly go down after just a little bit of packing.

Tips to Handling a Large Amount of Snow 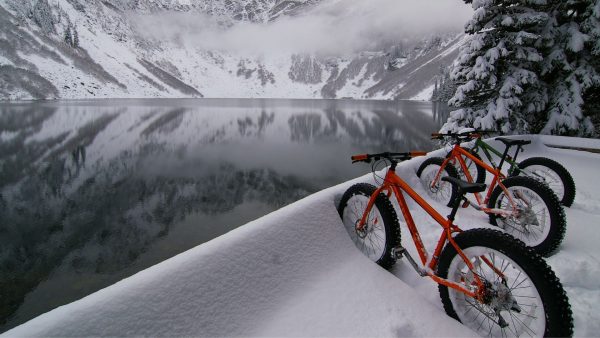 It’s frustrating to see a little bit too much snow on the ground and have riding plans canceled because of it. Some people will do whatever they can to get out there and ride, and there are a few tips to keep in mind that will make it a little safer and more fun.

1. Use the Widest Tires Possible

Most fat bikes have a range of tires that they can use depending on the frame. To survive thicker snow, a wide tire is always going to perform best. Try to go as wide as possible, even if it is a spare set of tires that are only used during certain conditions.

As people become more and more into fat bike riding, it makes a lot of sense to have at least two different sets of tires. This helps to avoid having to switch studs in and out, and if conditions are ideal, who wouldn’t want a slightly skinnier wheel to speed things up.

2. Find the Most Popular Trails

The best bet for a safe experience when riding a fat bike in heavy snow is to find the most popular local trail around. It might be something people avoid any other time of the year, but if it’s the most popular, it has the best chance of others already packing the snow down by riding through it.

All it takes are a few brave riders, in the beginning, to start packing down heavy amounts of snow. They pretty much end up in setting the stage for so many other riders to have their own great experience.

In heavy snow, there is no need to try new moves, try to set new speed records or anything else like that. Riding in the snow is a tough workout, and most should look at it that way only. Enjoy the experience, but don’t try to go crazy.

4. Stick With What is Known

Riding in heavy snow, especially for beginners, should only happen on trails that are familiar without a lot of snow on them. Otherwise, it is hard to gauge just how steep a hill is, or how tight a turn might be.

Experienced riders have more opportunities to take more risks, but just be aware before going for something completely new.

At some point, there will be more companies experimenting with even wider tires on fat bikes available to the masses. Right now, they seem to be around 5 inches or so at the widest. A wider tire would be able to handle more snow, but frames just aren’t built for that at this point.

Once the width of the tire maxes out, studs help considerably. In the future, more dependable studs might start emerging. At this point, most fat bike tire companies keep the studs strong enough to help with snow and sand, but still versatile enough for use on hard surfaces. A more customized tire might become necessary down the road for extremely snowy conditions. 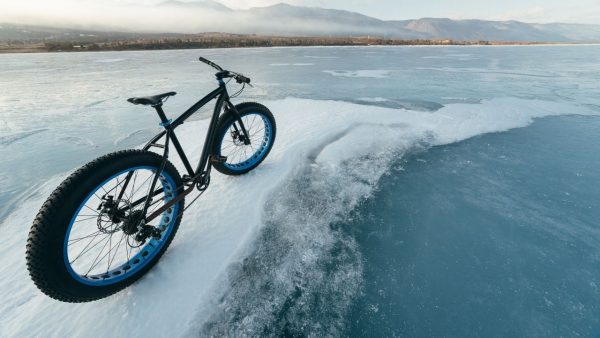 Fat bike riders tend to be pretty adventurous, but there are some safety concerns with more and more snow on the ground. Some people will be just fine taking it a little more cautiously, but it’s important to pay closer attention so that there are no mishaps.

Snow doesn’t cause that much of an issue for fat bike tires that are equipped for the winter. Between the width of the tires and the studs attached, they won’t slip around too much. When it becomes an issue is when there is a significant amount of ice, which could be underneath all the snow.

Make sure to take things slowly in the beginning when trying out a new trail. Also, pay attention to certain parts of the trail that tend to puddle up or stay wet during normal conditions. Those will be the areas most likely to have ice underneath, and no one wants that unpleasant surprise.

The thicker the snow is, the harder it is to control a bike properly. The steering will go every which way, as it is trying to carve through inches and inches of snow. It’s important to use two hands at all times when steering, especially down hills. All it takes is one particularly thick patch of snow to sway a bike into a certain way.

Check to make sure that the handlebars and breaks are in great working order before attacking a heavy amount of snow. They are put under a lot of stress, and if they are not in great overall shape, the chance of losing control goes way up.

If the terrain is a little hilly, don’t expect the accumulation to be the same on all parts of the trail. It could vary quite a bit depending on how things are set up. Never assume that the ground is the same level just because the snow is. Some areas become packed with snow, and others could have some high snowdrifts that are very problematic.

The appeal of riding in deep snow

Despite the struggles on fat bikes some might go through, there are plenty of people who can’t get enough of testing the limits and riding in deep snow. It many ways, riders will view this as a new challenge and a new twist on a path they might ride all the time.

There is also something very quiet and relaxing about riding a fat bike in fresh snow. Snow helps quiet everything around it, killing sound and making it an enjoyable experience for everyone. It is one of the best ways to take in nature and escape from the hustle and bustle, specifically in urban areas.

Finally, some people just like proving that a fat bike can handle any time of the year. Snowfall differs in different parts of the world, and some only get a few significant snowstorms in a year. It is a new type of challenge for those people, and more of a standard routine for those who live in very snowy areas.

As long as people are careful about how much they try to pull off in the beginning, fat bikes can handle a decent amount of snow. Consider anything below 6 inches of snow as relatively tame to handle for most fat bikes. Once it starts to get higher than that, it might take some extra precaution, or even a change in their bike set up.

The one major thing to keep in mind is that fat bikes handle snow much better than any other type out there. Road bikes stand no chance, and most mountain bikes can only handle a small amount of snow accumulation. For people who want to go out in snowstorms and experience that type of riding, a fat bike is a must.

4 thoughts on “How Deep of Snow Can a Fat Bike Go Through?”