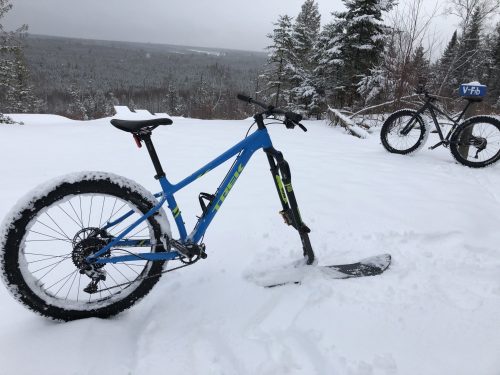 Have you ever seen that popular youtube video of someone just flying down a hill with their fat bike where the front wheel was replaced with a ski? I first saw that video about a year ago when someone sent me a link, and I must say I was intrigued.

One of the problems I had with the Fat Bike Ski is its lack of online reviews. Let’s be real; if anyone is going to spend a large amount of money on something, they’d probably like to know what other people think about it. That’s why I decided to try the fat bike ski for myself and tell you the good and the not so good of this product.

First off I will have to do this review in two parts. The first part will be this winter. I will do a second review next winter. The reason for this is the lack of snow in my area and the fact that the ski hills are closed due to the global pandemic. So I won’t be able to try the fat bike ski on an actual ski hill until next winter.

First, let’s begin with my thoughts for the Fat Bike Ski while riding on an ungroomed trail. The trail I was ridding was initially groomed, but we just had a snowfall. We received approximately four inches of wet snow, so it was an excellent way to try the ski on this type of surface.

I was surprised as to how well the ski glided above the snow. It did sink a bit, but as long as you keep pedaling, the ski kept gliding. I was fine while riding on a flat surface but once I began an incline, I knew this was going to be a workout.

I have to admit the ski can go up inclines but it was certainly not meant for this. It was a leg burner, and I didn’t really enjoy it, but to be fair, it was an ungroomed incline, so it wasn’t much fun with a 3.8″ wide tire either.

Now for the Downhill. Going downhill on a semi ungroomed trail was fun. I was riding down the trail much faster than my friend who had a 4.5″ fat-tire on the front. The bike was effortless to maneuver through the tight corners.

The trails were much better the next day after being groomed. The surface of the trails was also very hard since it was early morning, and the weather was well below freezing.

Riding on flat trails was easy and smooth. Riding uphill was much better than the day before, but you still know that the ski is simply not meant for this type of riding.

The downhill single tracks were FUN! I was going fast down the trail, and maneuverability of the Fat Bike Ski was superb! I was surprised as to how much better the bike was maneuvering through the corners so easily, given the fact that it was only my second day riding with the Fat Bike Ski.

Click here to learn how to groom your very own Fat Bike trails!

Downhill With The Fat Bike Ski

Winter downhill fat bikers are who the Fat Bike Ski was made for, In my opinion. The reason I say this is the impeccable maneuverability during a high-speed descent.

You can really tell by taking a closer look at the ski itself of how much thought and engineering that went into the build process. The sides of the ski are much thicker than a regular ski or even a snowboard for that matter, making this ski very stable on all surfaces.

What would make this the ultimate machine would be to equip a Fat Bike Ski on an e-fat bike. Like I said before, going uphill is no fun, but going downhill is a blast! I would certainly have more fun on an electric fat bike by letting the motor ride me up the hill before gliding at high speeds down the hills using the ski.

Next year I will be trying the ski on a ski hill. I had a small taste of that while I was riding my local trail system. There was a small section of wide and mostly icy snow going down a small hill. The ski had no problem drifting side to side down the hill.

The ski gives the fat bike such superior handling characteristics versus a front tire, offering predictable oversteer vs. the front tire pushing understeer, which is simply not as much fun.

Installing the Fat Bike Ski was straight forward. There was a small instruction printout that came with the product, but I just went on their website and looked at some pictures on how to get it installed.

After you’ve installed it once, you’ll be able to pop it on and off in just a few minutes. The one advantage I have for my fat bike is I have a quick release for my front tire, so it’s nothing for me to pop my wheel off and place the ski in its place by using my quick release.

The one thing you’ll have to do every time you want to swap the tire for the ski and vise versa is uninstalling the front brake calipers and front brake lever. The ski not only attaches through your axle but also screws into the brake bolts.

So one of the most important information is how much does the Fat Bike Ski cost. One thing is for sure, this ski is not cheap at $875 USD.

The build quality and the sheer engineering it took to build the final product is most likely the reason for the high price point.

The price is the main reason I wanted to write a review for the Fat Bike Ski. I would certainly want to read some user reviews before spending $875 on a fat bike add on. The ski is on sale for $795 at the time of writing this review, so you might luck out and snag a deal!

Is it Worth It?

So is the Fat Bike Ski a good investment. Well, this would all depend on the type of winter biking you like to do. If you’re a downhill speed addict and looking for the ultimate drift machine, then this is for you.

You might want to skip this product If you’re just riding your fat bike on groomed singletracks with minimal downhill. If there is a mix of downhills and inclines I would take a look at this ski because it is fun to ride on a single track, just not as fun as a dedicated downhill.

I personally love this product. The reason why I would give this a favorable review is the lack of learning curve you have to go through while using the Fat Bike Ski. It’s so simple to set up and use and it handles so well on your very first ride, wether its flat, uphill or downhill.

Try It out for yourself and let me know how you like it, I’d love to hear from you! Also, check out their website for more information.