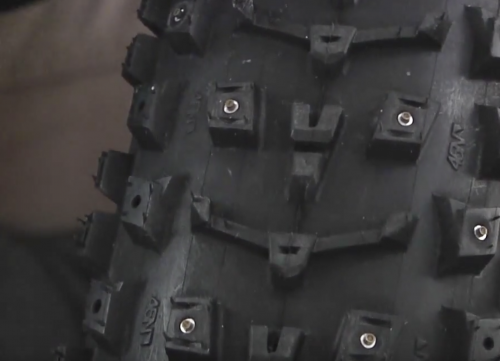 When people start to think about studded tires, they might not understand just how many options are out there for consideration. Not only can studded fat bike tires be purchased and ready without any installation, but some other methods are cheaper to consider. On top of that, the number of studs per fat bike tire can be adjusted when done manually.

The vast majority of people are going to go ahead and purchase pre-studded fat bike tires. It makes the most sense, since it is fairly easy to find just the right fit these days. Some people will order them online, while others will go to a local bike shop to see them up close before making a decision.

When stud installation happens before arrival, a person doesn’t have to go through the process of learning how to install everything properly. There are several different variations as well, so a person can get a short or longer studded fat bike tire, depending on where they are located.

So how many studs come with a typical studded tire? Most people look for at least 100 on the lower end to make an impact. Some options allow for hundreds to be available, just depending on how many studs a person thinks is necessary. Usually, the more common snow is in a region, the higher the stud count.

These companies develop studded fat bike tires, knowing that there will be some loss of studs as people start to ride. If a person is worried about that, going with a tire option that has 250 or even more is the way to go. That way, even if a few get lost in a typical ride, they will still function at a high level.

The good news is that the pre-studded fat bike tires are much less likely to lose a lot of studs early on. They have a lot more experience than the average person at home trying to put studs in for the first time. The quality control alone will make them last a while.

If a person doesn’t want to buy tires that are completely set up already, one option is to go with a studdable fat bike tire done at a person’s convenience. The same manufacturers that offer pre-studded fat bike tire options will also allow for people to use tires completely set up with studs. The final step is up to the customer. Think of these tires a bit like running spikes. The holes are there, so the hardest part is done, but a stud installation tool is needed to put some new options in to fit the terrain.

One advantage to going with an option like this is now a person can pick the exact type of studs they want. There are three main types of studs on the market right now, including pointed, flat and concave. The decision really depends on what type of riding a person is doing consistently.

The labor that goes with installing so many studs at once can be a bit tedious, but it allows for more flexibility. Try to nail the process down, because that is the best way to see some results.

It is best to do this with new tires if possible, because the dirtier the tires become, the harder it is to install studs in those holes. It takes a thorough cleaning to open up the holes and allow for easy insulation.

For people who want to save some money, the best way to do that is to take the studding process on completely alone. That means turning a regular fat bike tire into one with studs, installing everything from beginning to end.

There are obviously positives and negatives to this. Some people are going to be very frustrated with the fact that they have to do all of this themselves, and they may not even know exactly how to line things up. There are plenty of walkthroughs available online that explain how the process works, so people have a better understanding of what to expect.

One of the best do-it-yourself methods is to use an inside-out set up. This is installing the screws from the inside of the tire, and poking them out at just right length. Tire lining needed to help protect a tube inside the tire, and if it is not done correctly, it could lead to some pretty quick flat tires. The advantage is that if this is done right, this is going to provide some fantastic traction overall.

A slightly easier method to use is a screw-in method which allows for installation on the outside. Using simple metal screws, these are installed around the tire very carefully and spaced out perfectly. If it is not done carefully, there is a high chance of ruining the tire, or forcing it a person to go tubeless. A standard tube simply won’t be able to survive inside the tire if there is anything sharp in the way.

How many studs per fat bike tire are needed when doing complete self-installation? The decision is up to every individual. There are some people who are going to be very happy with only installing around 100 and seeing how it goes at first. If the tire seems like it needs more studs, they can be added at a later time.

Others will go in the opposite direction and install over 250 from the very beginning. That might seem like overkill, but some people are dealing with some pretty insane amount of ice. It also puts a person at a little more peace to know that if they didn’t do it right, there are still enough studs that survived to make the tires serviceable.

Are There Any Alternatives to the Installation Process of Studs?

The final option that some people turn to is a tire chain. It can be very beneficial for people who want a quick set up on a standard fat bike. This was an old method before studs became more popular, and people still count on them every single day to navigate on slippery surfaces.

There are several tire chains available for fat bikes so that people do not have to spend a lot of money. For just about $100 or so, a set of chains can provide some temporary grip. It is not going to be the exact same as using studs, but it certainly speeds up the process.

Most people look at this as only a temporary solution, and more for shorter rides. For people riding a lot in snowy/icy conditions, a chain is not going to hold up.

Click Here for the 3 Best Studs For DIY Studded Tires.

Is There Such a Thing as Installing Too Many Studs?

There really is no such thing as installing too many studs for a fat bike tire. Maybe it will add a little bit of extra weight that a person doesn’t want to deal with, but the added traction is certainly a benefit as well.

Remember that studs will fall out from time to time, so it is always best to install too many instead of too little. If too few studs are installed, then it becomes an entirely new process to add additional ones. It becomes very complicated, especially if the tire was purchased brand new as a studded tire already.

Why Studs Continue to be so Popular

It is hard to explain to some people why fat bikes with studs are so popular. Most of the time, that’s because a person is riding where there is not a lot of snow. If there is very little snow to deal with, there is a good chance that people are going to decide to go with a non-studded fat bike option. Tires without studs are still able to tackle a lot of snow, so they do not have to deal with too much of a struggle in that case.

Do not be afraid to ask for any recommendations from a local bike shop, or even a local fat bike rider on the trail. Maybe they have a little bit more experience with studded tires, and they can provide some assistance. The main thing is not over complicate the matter. If studded fat bike tires are ultimately needed, it is a worthy investment to stay safe on the trails. Otherwise, there is a good chance of an accident or slipping that no one wants to deal with.