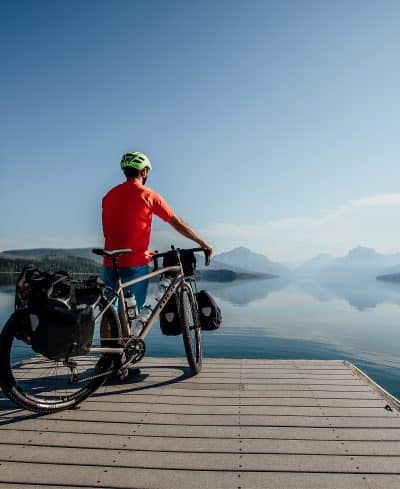 Seeing the world and connecting with nature by going bikepacking has turned into a very popular activity for many people. It is a way to combine riding a pretty light bicycle for exercise, and bike touring and exploring new areas.

While a lot of different bikes can work for bike packing, it usually comes down to a debate between fat bikes and gravel bikes.

Which one is the best of the best for exploring in this way? There really is not a concrete answer, simply because people are going to have different routes that they take. Not only that, but something that is comfortable for one might not be suitable for the other. However, we break down bike packing in general, and when people might want to go with one type over the other.

The definition of bikepacking is rather fluid, as people can go on many different trips to combine riding bikes for exercise, and touring different parts of the world.

Most people are going to use bag systems designed specifically for their bike so that they can keep moving without feeling too much difference in weight. Since tours are usually not on the most even ground, the bags need to be secure enough that they do not get in the way.

The goal is to reduce equipment as much as possible, much like with ultra-light trekking and other types of riding. As long as the bags are correctly attached, it is not going to get in the way. People refrain from using large racks, opting for smaller bags that have the essentials.

Click here for my recommendations on some awesome bikepacking frame bags!

Bikepacking can be connected to other types of riding, such as long-distance mountain biking, self-supported races, and more. It is really taking off in the last few years, in all different parts of the world as well.

People love the allowed freedom to go bike packing and not really have to worry about breaking down, getting tired, or even getting something to eat in the middle of nowhere.

Some will go on a bike packing trip that lasts only part of a day, while others will bring enough with them to be on the road for a while. Having all the equipment needed for a good night’s sleep is sometimes a challenge, but people figure out a way eventually to only bring with them the bare necessities.

Bikepacking With a Fat Bike

A lot of people look at the fat bike as the perfect type of adventure bike out there. Having really wide tires on the fat bike can allow people to go over any kind of surface without much of an issue. It also opens up the opportunity to ride 12 months out of the year, as some of the other bikes are only going to function consistently when it is a little warm out.

Fat bikes are extremely flexible, and companies have done a good job of reducing weight as much as possible as well. This makes them very strong and capable of holding all the gear necessary for bikepacking, but still lightweight enough to pick up some speed. A person is never going to go as fast on a fat bike as they do on bikes with skinnier wheels, but it is still something worth checking out.

The first time a person realizes with a fat bike is that there are so many new destinations out there. It does very well on gravel roads and sandy beaches, but it can also handle mud and snow without any issues. Climbing is easy, and a person really feels like they are always in control. For even more control, adding studs to the tires is very helpful.

If the goal is to do a lot of bikepacking in the winter, a fat bike is a perfect option. These were originally designed for snow anyway, so it just makes sense to have something that can handle that. No other bike is going to live up to those expectations at all, and there are even ways to customize the bike so that it can handle snow and ice very easily.

The only people who should stay away from a fat bike are those who want to travel as lightly as possible. Maybe the trails are going to be very strenuous, but smooth. If that is the case, there is no need to have a big, rather bulky bike to take everywhere. Instead, it makes more sense to go ahead and see what other options are out there.

Bikepacking With a Gravel bikes

A gravel-like is sometimes hard to find when looking for different options but think of it as something very similar to a traditional cross bike. Even though gravel bikes have not been around for very long, they have pretty much the same look, and bikepackers like how they perform on trails.

About the only difference between the two types of bikes are some small technical details and overall dimensions. They both perform very well at giving people a feel of a racing bike on different types of terrain.

As one might expect, a gravel bike does an amazing job on unpaved roads, while a cross bike might do better on more challenging courses and uneven terrain beyond gravel and loose rock.

Due to their focus on a specific type of terrain, some people do not look at these as a versatile option for bikepacking. It does a specific type of riding very well, but it might not be able to live up to expectations as a more casual option for a person to invest in. Only those who are going to focus on gravel trails most of the time should be investing a lot of money into something like this.

The Trek Checkpoint is just one example of a very high-level gravel bike option. It does so many things well, and riders all over the world are falling in love with it.

They like the positioning that is a bit more upright, a frame triangle that has plenty of space for large bags, and plenty of other points to put smaller bags if needed. It all adds up to a comfortable ride while going at pretty high speeds. A person can really load up a gravel bike and hit the trails without any concerns whatsoever.

Can Other Bikes Work as Well For Bikepacking?

The two most popular options for bikepacking are fat bikes and gravel bikes. With that being said, there really are no set rules when it comes to bikepacking. It all comes down to what type of surface is ahead.

In some cases, a racing bike might actually make the most sense. If the route is paved almost the entire time, it makes no sense not to go as fast as possible by using a skinny tire. There are still plenty of places to connect bags so that a person can carry around what they need, and it is still going to be a very lightweight ride overall.

All a person has to do is look at some of the riding that has gone on in France along the same route as the Tour de France. Riders have no problem going on long tours, carrying bags with them, and having a good time overall. Adding speed with a racing bike just makes sense instead of going with something more cumbersome. It allows for so much more coverage, which means more things to see and take in.

A mountain bike is usually somewhere in between a fat bike and a gravel bike as far as size is concerned. It is not quite as versatile as the fat bike, only because the wheels are only so thick. They do usually have a bit more in the way of suspension and gears so that it is a comfortable ride.

Mountain bike riders like to think that they have the most versatile bike out there, and it is hard to argue in a lot of cases. It does just about every surface well, except those snowy days. For more control and a little more speed, a mountain bike can work for bikepacking just fine.

Beginners might not know exactly what type of bike packing they will fall in love with, so if that is the case, starting with a fat bike might be the way to go. It is going to be the most versatile option out there, and a person will be able to ride and get exercise 12 months out of the year.

If a person figures out that they are going to go on a more specific type of trail almost exclusively, that is when it is time to specialize in different options.

A lot of people love what a gravel bike brings to the table. They are versatile enough to work once in a while on different terrains as well. Just keep in mind that when trying out a new surface, do not go too fast right out of the gate with a gravel bike. This is a good way to get in an accident if a person is not careful.

One thought on “Fat Bikes vs Gravel Bikes for Bikepacking”