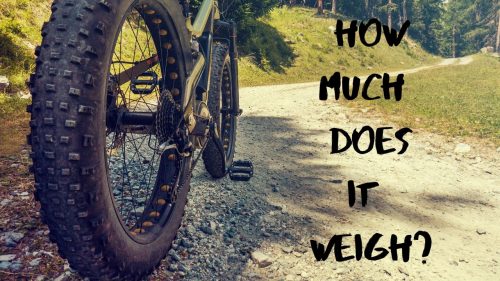 The first time someone spots a fat bike in the wild, most people are blown away by how much bigger they look. When most people picture a bike, they think of something that seems pretty sleek and lightweight. It makes sense for people trying to go as fast as possible.

Fat bikes are a little different in that they are built for speed, but also to handle the elements. There is no way around fighting the elements without some sacrifices in the weight department. Just how much do fat bikes weigh? Like any bikes out there, there is a bit of a weight range, and it usually comes down to the price of the bike.

Breaking Down the Range of Fat Bike Weight

Take a poll on how much fat bikes weigh, and there are bound to be many answers. Generally speaking, an entry-level fat bike is going to weigh around 35 to 40 pounds. That might seem like a lot, specifically when comparing directly to a road bike, but they have come down in weight quite a bit over the years.

Anything that is under 30 pounds is considered a premium model in most cases. They have premium parts that help shed some weight, and the components are top end as well. Not only are they lighter, but the overall comfort level and performance is better as well. Of course, a person is paying for this type of weight and feel, usually north of a few thousand dollars.

It would be nearly impossible to get a fat bike below 20 pounds with the current options available as far as components go. To get that low, the tires would need to be reduced to mountain bike levels. At that point, it is no longer a fat bike, so it’s a bit of a moot point.

Why do Fat Bikes Weigh so Much?

Many label fat bikes as the jeep of the bike world. They need to go everywhere without having any struggles whatsoever. To do that, they need to be built for just about any type of scenario. A road bike, for example, is built specifically to go on generally smooth pavement. Comparing the two is the same as comparing a running shoe to a snow boot.

When looking at frames for a fat bike, most of them are going to be pretty similar to mountain bikes as far as weight is concerned. The shape is a little different, but other than that, there is not really much of a difference. Fat bikes might be slightly heavier on average, only because they are built to carry more weight.

Components are the biggest culprit when it comes to weight. Specifically, fat bike tires are bigger than any other bikes out there, so of course, they’re going to weigh a little more. Gear sets for fat bike setups are also a bit more on the expensive side, so that something else to keep in mind.

How Much Lighter Can Fat Bikes Become?

The technology is there to make a fat bike lighter if the weight was the only aspect of the bike worth considering. There comes the point where a fat bike becomes too lightweight, as shedding weight could affect just how sturdy the bike is in specific scenarios.

A fat bike needs to handle anything possible out on a trail, and if it is too lightweight, it is not going to hold up particularly well.

What Are the Best Ways to Cut Weight on a Fat Bike?

Instead of buying a brand new, expensive bike to lose some weight, some believe that it is a better solution to change out a few things components. Putting a fat bike on a bit of a diet plan can speed up the ride and make it less of a challenge for certain people.

What many will realize, upon further examination, is that the best way to put the bike on a diet is to target the wheels. The tubing, the tires and the wheelset are all relatively easy to change, and a few pounds are easily shed just like that.

A very affordable way to cut some weight from a fat bike is to go with a lighter tire tube. It might not seem like it would make that big of a deal, but there’s definitely some weight to shed in this regard. Remember, fat bike tire tubes are heavier than any other tubing out there.

Look for tubes that way somewhere around half a pound. They are not going to be that much more expensive than normal tubes (which can weigh between 1.5 and 2 pounds in some cases), and they are usually made up of higher quality material as well. That means that even if a person spends more initially, they should be able to last for a while and hold up against some abuse.

Speaking of tubes, a person can attempt to go completely tubeless in a fat tire bike. It is a move a lot of people enjoy once they commit, but it can be complicated for someone to pull off themselves.

The better option is to seek out a professional the first time, as they will be able to give a bike a tubeless feel. Not only is there a decrease in weight, but it is a more comfortable ride according to most people as well. 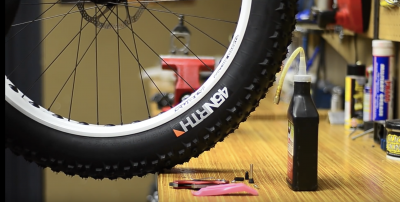 If losing weight with the tubes is not enough, another pretty obvious solution is to go for some lighter tires. As great as it is the have a massive tire with outstanding grip, most people don’t need that on their normal rides. It makes more sense to trade out stock tires and go with something that is a bit more performance-based for speed if weight is an issue.

A standard fat bike tire on a stock option is going to weigh somewhere around 3.5 pounds, give or take. Shopping for other tires to use as a replacement can help a person shed a pound or so per tire.

That might not seem like much, but losing 2 pounds just in the tires is pretty significant on a bike that might weigh just 30-35 pounds. It will make riding easier, and there is very little sacrifice as far as grip and performance are concerned.

The biggest downfall to this is the fact that replacing tires can be a little costly. Most people are looking at a few hundred dollars to buy something significant. Many people believe it is a worthy upgrade in the end, especially if the other tires work for different things.

Some people use the stock tires to add studs to them for a more versatile option in really snowy conditions. They could also come in handy as a spare pair of tires in case something was ever to go wrong. 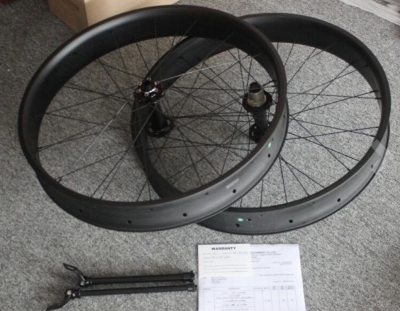 This is perhaps the highest cost for anyone trying to reduce the weight of their fat bike. People should expect to pay a few hundred dollars to get a quality wheelset that makes a difference. The good news is that the bike feels a lot lighter when going with something that is an aftermarket option. A standard stock bike is only going to have a pretty basic wheelset, and those can be pretty heavy.

To keep the cost down, shop around as much as possible to find a wheelset that is lightweight and affordable. Most people don’t want to spend a ton of money in this category, but good wheelsets can shed 4 to 6 pounds.

Fat bike tires are pretty heavy, and with some aftermarket options, the bike can go through a pretty solid diet. The important thing is not to get too caught up in making changes to an existing fat bike.

There is a point where a person might be trying too hard and therefore getting themselves in a tough situation spending more money on new replacements. Instead, they could just be paying for a brand new bike and getting upgrades in other areas as well.

Click here for an awesome set of ultra-light and strong Carbon Wheelset from Amazon.

Shedding Weight in Other Ways

If the goal of lowering the weight of a fat bike is to feel a little more comfortable, some people will look beyond the bike for results as well. It is no surprise that a lot of riders will have plenty of other options on them or connected to the bike during a trip.

It makes sense because a person might need to stay safe on the trail with emergency equipment, food, technology, and more. Make sure only to take what is needed to help cut down the weight of the entire ride.

It might not seem like that big of a deal to shed a few pounds, but it does make a difference if a ride is going to last a long time. Some riders wheels start to feel some fatigue, especially if there is added weight to the back.

Try to travel as lightly as possible, and think about adding some of the smaller items directly to the bike instead of the back. This helps to spread out the overall weight a bit more, instead of directly being on the rider.

Dealing With the Weight of a Fat Bike

No matter what option a person goes with, the truth is, fat bikes are still going to be a bit on the heavy side. It’s not only for personal safety, but a lighter bike wouldn’t exactly go faster anyway.

Most other bikes would struggle and be virtually worthless. Even a typical mountain bike would have a lot of trouble. This is why the fat bike stands out, and people overlook the weight.

Once a person is actually on a fat bike, they don’t tend to feel like they weigh all that much. That is because they do glide over terrain in most cases, and they spread the weight out pretty well. Don’t be shocked by how much a bike is listed for weight-wise, because no one knows how it feels until they are on it.