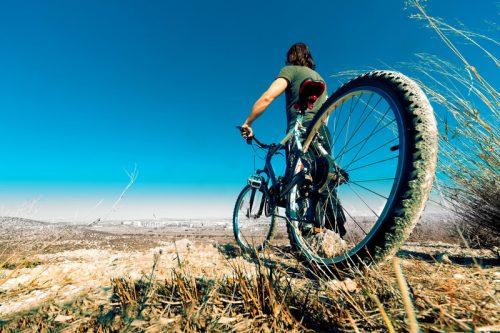 Investing in a mountain bike is a pretty good option for people who wants a basic, all-around ride. Maybe there will be some riding on the pavement, as well as off-road. Their versatility is what makes them so popular, and they are not going away anytime soon.

With that said, there are times in which people might want to customize their mountain bike by making some changes and upgrades. Wheels are commonly looked at as something that is easy to upgrade without having to do too much work.

However, a person needs to be a little careful about what type of tire they end up purchasing. Those wanting a wider tire to convert a mountain bike into a fat bike possibly might be limited more than they initially realized.

Just how wide of a tire can fit on a typical mountain bike? Each mountain bike is different, but it becomes pretty tough to fit a tire over 3 inches in width into a standard mountain bike. Not only are the rims on mountain bikes unable to accommodate super-wide tires, but the fork in the front and the chainstay in the back also play a role.

For a do-it-yourself conversion, several alterations must be made to a typical mountain bike for it to work.

The first step to a fat bike tire conversion is to see exactly what is currently possible with the setup. Take a look at not only the existing mountain bike tires, but things such as the rim, the space in between the fork, the chainstay in the back, and more.

A very wide mountain bike tire might be fairly easy to upgrade just beyond the fat bike threshold. At that rate, the change will not be enough for some people to think it is worth it.

Remember that the tires also need to be the same size, unless the mountain bike is able to accommodate differences there as well.

Standard mountain bikes usually come in one of three diameters: 26 inches, 27.5 inches, and 29 inches. Sizing mostly comes down to how tall the rider is in this scenario.

To make the conversion work, most are looking at more than just new tires. Investing in new rims, a wider carbon fork (Amazon), a more accommodating chain assembly, and more will cost money. It is important to treat this as an opportunity to make worthy upgrades as well.

It makes no sense to do a conversion by only buying the cheapest solutions available. Go for a better fork that will kill vibrations and make a smoother ride overall. Do not be afraid to get lighter rims to make the bike feel a little easier to ride. Weight matters on long rides, and investing in lighter rims make a difference more than most realize.

Unless a person is really handy with bikes, it might make the most sense to go to a local bike shop for assistance. They will be able to make the necessary changes to convert a mountain bike into a fat bike. This is the more costly move, but a person doesn’t have to worry about potentially doing damage or not setting things up the right way.

The result of the conversion is a mountain bike frame with fat bike tires. This is preferred by some people because it tends to be a little more lightweight. Not only that, but the geometry of the bike is a bit different.

Everything else on the bike should be good to go. There really isn’t that much of a difference in the way mountain bikes and fat bikes look beyond the tires. At least, not enough for people to nitpick too much and make even more changes to complicate the conversion.

Why Do Some People Want Wider Tires on their MTB?

Wider tires are becoming more popular than ever. Perhaps the biggest reason why is that thicker tires allow for riders to put less air in the tires. For people transitioning from road bikes, they might think that a tire that is not fully inflated will not be beneficial at all. Off-road, low PSI helps out in many ways.

Comfort is perhaps the most noticeable change with a wider tire and low PSI. It acts in a lot of way as a suspension system, absorbing shock when riding over tough terrain. Rides can get a bit bumpy off the road, and fat bike tires will smooth it out.

Along those same lines, riders find that they can cover more distance because the ride is easier overall. When a ride is smoother, a person has more enjoyment when putting in miles. Instead of constantly feeling like it is a battle, riding with a thick, low PSI tire is a lot like using a cheat code.

Finally, wider tires actually make the bike more versatile. There used to be a time when people thought a typical mountain bike is the most versatile bike a person can on.

What people are realizing is that fat bikes can work on any surface very well. Some trails are off-limits for people with standard mountain bikes, simply because they will not be able to handle everything out there.

Is There Any Reason to Stay Away from Fat Bike Tires? 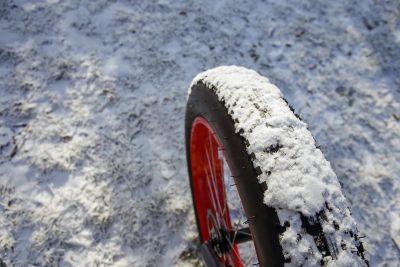 Mountain bike owners thinking about a conversion to fat bike tires should know that while there are a lot of positives, there are negatives as well. Maybe the biggest negative is that a very wide tire is going to create a lot of friction with the ground. If a lot of riding is done on hard, smooth surfaces, it might not be that beneficial to make the change.

Even with an ideal psi, fat bikes on the pavement are not going to perform as well as skinnier tires. Most people are not investing in a fat bike for this reason anyway, so it is usually not much of an issue.

On a smaller scale, some do not have space for a bigger bike when storing it at home. Wide fat bike tires take up a lot of room. They are also heavy. If storage space is limited, adding a converted mountain bike to the mix will make things even more cramped.

Is a Fat Bike Conversion Worth it in the End?

There is no simple answer as to whether or not going through a conversion with a mountain bike to a fat bike is worth it. It largely depends on just how much time and money it takes to get the bike to where it needs to be.

Try to ballpark how much time and money it will take before truly getting started. It might be tempting to jump right in and see how things go, but once it started, it is hard to stop.

One expense after another can make this a very costly conversion. People are forced to finish what they started, or they will not have a functioning bike at all.

There comes a time with every single mountain bike owner where they decide enough is enough. If too many changes are needed, it makes more financial sense to invest in an entry-level fat bike. Doing this ensures that all the components fit correctly, and it is a brand new bike instead of a bunch of parts mixed together.

The fat bike tire phenomenon is definitely upon us, and more people than ever are intrigued by these huge tires. They are for everyone, but off-road riders will definitely benefit. Throw in some snow, and fat bike tires become even better.

A tire conversion is sometimes very simple, but there are other times where it can be a huge hassle. Try to assess everything first and make a decision on whether or not it is worth it. Fat bike tires are nice, but if a mountain bike needs completely changed, it might not be worth the hassle.

One thought on “MTB to Fat Bike Tire Conversion – How Wide Can You Go?”