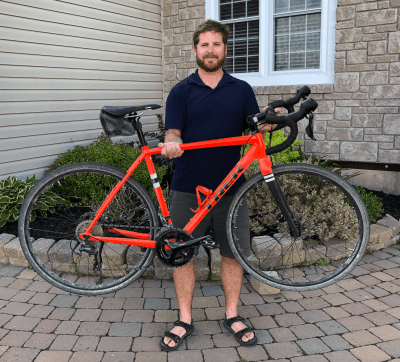 Finding the right bike is essential for anyone who wants to get out there and get some exercise. There are many different types, and each one is designed specifically to handle different terrains.

Both gravel bikes and road bikes are designed to go fast, but they are used on vastly different surfaces. Here is a breakdown on the two different styles of bikes, and if it is ultimately worth investing in a gravel bike over a road bike for some.

Versatility is the major selling point with any gravel bike. These bikes have the ability to go fast on streets and other pretty easy to handle surfaces, but they do a great job on gravel and loose rock as well.

This means the people can do some off-road riding and not have to worry about anything. The tires are fairly wide and full of tread, but not nearly as much as a mountain bike or a fat bike.

This very specific type of bike has evolved over the years, and more and more people are turning to them if they want something that performs well. They usually have a similar set up to a road bike, so people can pick up some high speed without feeling any loss of stability.

Another advantage of going with a gravel bike is that some options allow for different sized wheels. This means that a gravel bike can be converted into a mountain bike, capable of handling some tougher surfaces along the way.

A gravel bike certainly is not for everyone, but a lot of people compare them to a standard hybrid type of bike out there to purchase. Other than riding on gravel, it does not do any surface extremely well. However, it is versatile enough to hold its own anywhere else.

With skinny tires, premium parts, perfect geometry, and more, people who invest in a road bike want to maximize their speed as much as possible. The goal is to ride on flat surfaces as fast as possible, and it really does not take that much effort once a person gets going.

Anyone who invests in a high-quality road bike knows exactly what they are getting themselves into. They want something that can keep up on paved trails, road routes, or particular races. They are also people who are looking to commute or even do a job on a bike, and they want to get from point A to point B as fast as possible.

Road bikes are a bit complicated for first-time riders, as there are a lot of gears and adjustments that can be made. These are all meant to maximize performance, but it is going to overwhelm those who are just starting out.

Why a Person Should Invest in a Gravel Bike

When compared directly to a road bike, there are a few reasons that stick out as to why a gravel bike makes more sense. It might not always be the best choice on every single ride, but those who want just one bike to do everything will really like a few other qualities.

A gravel bike is designed with a bit less of a learning curve overall. For starters, the thicker tires make for a more natural way to stay stable on the bike. Some bike riders do not like moving to a skinny tire right away, because they feel like they might lose their balance and not be able to perform like they want to.

The geometry of a gravel bike is also slightly different, which leans towards beginner riders. Getting in the saddle for a road bike is pretty intimidating, and it might put some stress on the body that people are not used to.

This might be the most apparent reason why a gravel bike makes more sense than a road bike. Road bikes are a lot like running shoes, and that they are designed to do one thing very well. Wearing running shoes to play sports like basketball or tennis is not recommended, because they are not built for all the different movements.

When looking at bikes, the road bike does flat surfaces extremely well. They can go just about anywhere and outperform any other type of bike. It is a pretty simple concept, as less contact with the ground means less friction to slow things down.

A gravel bike will tackle any other type of surface better than a road bike. If a group of friends wants to go trail riding, a road bike owner can’t do that. With a gravel bike, it works well enough to go anywhere. It does it is best on the loose surfaces like gravel, but it works a lot like a mountain bike in some ways as well.

The aggressive racing position that most people are forced into with a road bike is a lot less intense with a gravel bike. Speed is still something that attracts a lot of people, but these bikes allow riders to feel a lot more relaxed if they want to.

Not only are road bike tires more expensive, but they are a bit harder to maintain. They are very skinny, which puts them in vulnerable positions if they have to go off the road for any reason. They are also inflated at a very high PSI, which can sometimes lead to some punctures out of nowhere.

A gravel bike is built a lot more on having tread and working with a bit of a cushion. A typical tire is inflated between 40 – 60 PSI, which makes your ride more comfortable as it acts a bit like a mini suspension. Since it is built for tougher surfaces, there is less of a chance of a puncture with similarly priced tires.

One thing about gravel bike tires that I recommend is to build them tubeless if you can. This will help prevent punctures and also give you the ability to drop the PSI from a firm 60 to a cushiony 40!

It should come as no surprise that a gravel bike is going to be a more durable option than a road bike. This is due to a few different factors.

For starters, they are a little heavier and also built a bit more rugged, so they can hold up over time a bit more. Road bikes are not built to handle much adversity, so they do tend to break down after a while if it is heavily used.

It is easier to carry around attachments on a gravel bike as well since it does not put nearly as much stress on certain parts of the bike. If it is going to be used as a commuter or as a way to navigate on certain trails, make sure to keep that in mind as well.

High-end road bikes are always a little more expensive than trail or gravel bikes. A lot of that has to do with companies trying to shave as much weight as possible off of road bikes. The only way to do that is to use high-quality parts, and those parts become very expensive.

Weight is a little bit less of an issue for gravel bikes, which is why they stay relatively inexpensive. There are still some costly options out there for people who take riding very seriously, but it is not going to approach the same levels as rode bikes.

Prices might be a little lower, but there is one negative to a gravel bike when compared to a road bike. Since they are not nearly as popular, it is harder to find them in stores or online.

They are also fewer options available from companies. With less competition and more of a premium put on finding the right type of gravel bike, that can work in favor of people opting for a road bike.

Unless a person plans on only riding on flat surfaces, a gravel bike is a more versatile option. It can still go very fast, and handling different surfaces certainly helps. Also, you can install “road bike” like tires on a gravel bike. If possible, people should try out a few different options and see if it really works for them.

The ideal situation for people who love to ride is to invest in different bikes for different purposes. There is no such thing as a bike that does everything well, which is why specialization is the key. The only problem is that it becomes costly, which is just not something most people can pull off.

One thought on “Road Bikes vs. Gravel Bikes – What’s Best For You?”