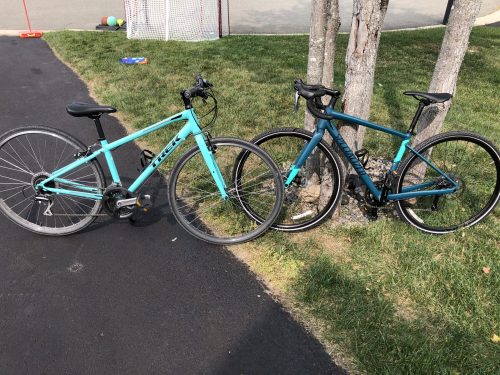 When looking at bikes that can do a little bit of everything, both gravel and hybrid bikes seem like the perfect fit. A lot of people think that these two types are pretty interchangeable, but there are some differences that people need to keep in mind.

What are the major differences between the two options? It is sometimes hard to pinpoint everything, since there is some overlap in the bike industry, but knowing the differences without people to make the right choice overall.

Some people dismiss gravel bikes because they have a slightly more relaxed geometry than a mountain or cyclocross bikes. However, they are not nearly as relaxed as a hybrid option.

At the end of the day, a gravel bike is still a pretty competitive option out there, so the geometry reflects that.

Both are gravel and hybrid bicycles are designed to also have the ability to carry quite a bit of bags and extra weight if needed. Some people go on pretty long gravel bike trips, so they need to be able to put bags where they are needed strategically.

For a hybrid bike, people will be looking to go to the store and bring something back possibly, so it needs to be able to handle that.

If the goal is to go on a typical ride for errands, the hybrid bike is the better option. A gravel bike is going to do a better job off the road, but it still works well on pavement.

Just keep in mind that a hybrid bike is only going to be able to do so much off the road. The geometry is part of the reason, but the overall bike is just not designed to do that.

A hybrid bike is going to provide a much more upright position, so do not expect to build up as much speed as some of the other bikes out there.

It does allow for a better view of what lies ahead, and it is a little easier for beginners to learn on as well. The geometry will not allow for the same amount of speed, but people with powerful legs can do a good job on either type of bike.

A hybrid bike is much more common to find in stores and online, which is a big reason why they are usually more affordable. They have more options out there, and companies are competing for each other when it comes to grabbing potential customers.

Gravel bikes are coming down in price, but people are paying for premium technology so that they can be a little faster in adverse conditions.

In a typical scenario, riding off-road is a little difficult for some people to handle. Companies can’t get by with a very traditional type of set up, and premium parts are also necessary.

If a person is going on a very long ride with a gravel bike, they do not want to be feeling a lot of pain from subpar parts.

At some point in time, everyone is going to mess around with different types of tires that they might want to use when it comes to riding.

The good news is that both gravel bikes and hybrid bikes can take many different types of tires with relative ease. In fact, it is a significant selling point for both bikes.

Between the two options, hybrids usually have a little bit more clearance so that a person can put in pretty much any tire they want.

Some people try to go as skinny as possible with a hybrid bike, giving them a faster ride that they can enjoy. Others will want to add a tire that might make the hybrid bike a little more off-road friendly, so they go with something a little wider.

Gravel bikes are usually going to be a little more on the performance side of things. Some people want to have a pretty thick tire so that they do not have to deal with any pain when they are riding over rough terrain, but it should be just fine.

The default tires for gravel bikes are also going to have a bit more grip so that can handle more challenging off-road terrains. A hybrid bike might be marketed as being able to take so many different surfaces, but it is mostly going to be on paved surfaces. It just does not make as much sense for the tires to be as grippy for something like that.

Much like the geometry of the bike, the handlebars make a big difference between the two different types of bikes. For a gravel bike rider, most people will enjoy the drop bars that allow riders to feel a bit more like they are riding a road bike. This can help build up speed, and also minimize the effect of any wind.

The vast majority of hybrid bikes are going to have a straight bar, which keeps a person in that upright position. It is certainly something that comes in handy to stay very alert, but it is not going to cut through the wind nearly as well.

This is one reason why some people are willing to invest in a gravel bike to use as a commuter. Even though it might not be explicitly designed for that purpose, being able to drop down and cut through particularly windy areas might make sense.

Many people might think that because a gravel bag is designed for performance, it is going to be lighter than a hybrid bike. However, on average, that is not the case.

It is going to be better to go with a hybrid bike if weight is what matters. People need to remember that gravel bikes are rugged options that need to be carrying more than just the weight of a person.

Hybrid bikes are usually going to carry other things as well, but they can get away with some lighter components.

It might not be that noticeable when actually on the bike because gravel bikes do an excellent job of spreading out the weight and making it feel a little lighter than it is.

People will also look for lighter gravel bike options if they get into the sport because they understand the importance of shedding a little bit of weight over a very long ride.

6. Which Bike is Ultimately Faster?

On rugged terrain, a gravel bike is going to be much faster than a hybrid option. It is just no comparison overall, as most hybrid bikes can only go very short distances off-road.

For a dirt road or pavement, the gap is closed considerably. Gravel bikes at the top end are still slightly faster, but there are some good hybrids out there that can compete as well.

Most people who are using either one of these bikes are not trying to set speed records, so having top and speed might not be a high priority.

It does seem to be a little easier to build up speed with a gravel bike, just because it is built slightly more like a road bike option. If a person is facing a headwind on a hybrid bike, it might take a while for them to get up to speed that they can start consistently keeping up with.

Which Bike is Better for an All-Around Option?

If a person has no idea what type of riding they are ultimately going to do the most, it probably makes the most sense to go with a gravel bike at this stage of the game.

They might be a little more expensive, but there are a lot of added benefits that make this perhaps the best all-around bike out there right now.

A hybrid bike is a great option for people who do not care too much for dropping down on the handlebars, but it is just a bit too limited for people who ride every day.

Eventually, people are going to want the option of either sitting in an upright position or dropping down and cutting through the wind while picking up speed.

For those starting, both bikes are going to provide some great value and last a long time as long as they are from a reputable company. Do not be afraid to try to find a local place that allows people to try different bikes to see what works for them.

Some people have a good idea of what they really want the most, and that can help when shopping online. For others, they will not know until they get a chance to test ride everything.