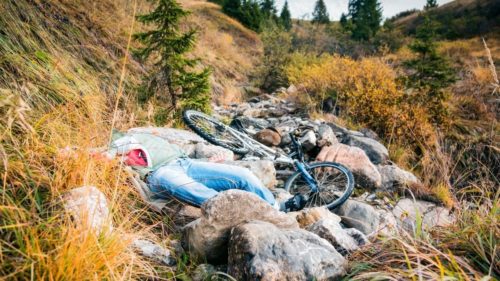 Getting out and exercising on a bike can be a great way to stay in shape at any age. There are many different bikes to pick from such as road and mountain, and a lot of people will gravitate towards one or the other based on the type of riding they want to do.

Both road and mountain biking are very popular, and they both have their pros and cons. Some people are very much into road biking, while others will always pick mountain biking and everything that goes with it. Occasionally, people site safety as one of the reasons why they pick one over the other.

That brings up the question of whether road or mountain biking is more dangerous. There is always a risk of a crash with any type of riding, but this is a deeper look at the differences that could sway riders one way or the other.

The Dangers Of Road Biking

Road biking is a fan-favorite option for riders who want to cover large distances in the shortest amount of time.

Riding on flat ground helps with safety in a lot of ways, but picking up a good amount of speed is definitely something that can put a rider at risk as well. What are some of the unique dangers of road biking? 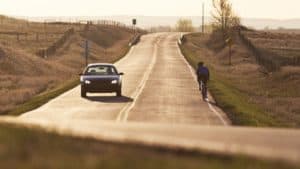 Even people who stick to bike trails will have to share roads at some point during their ride. After all, it is called a road bike, which means riding right next to vehicles going at a pretty fast speed.

There is an increase in bike lanes every single year, but it is still a pretty big risk to get out there with vehicles. Sharing the road is something that happens much more frequently with road bikes compared to mountain bikes, and it just takes one driver to put a rider at risk.

One way to cut down on the risk of riding the road is to be with a group. It is much easier for cars to see a group of riders instead of just one.

That is why so many groups of riders will hit the road early in the morning for locally organized rides. Also, have plenty of reflective gear and lights, even during daylight.

Instead of trying to blend in, stand out when on the road and drivers will easily spot cyclists. 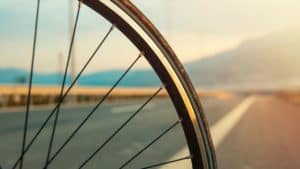 The reason why road bikes have skinnier tires is to help with speed and efficiency. Since the surface is flat, riders do not need a ton of tire to maneuver and grip the ground underneath. This can end up backfiring in some ways, especially if there is some type of accident.

Every cyclist at some point has found themselves in a vulnerable situation with skinny tires. Maybe the tire gets stuck in between a crack, and it becomes hard to get out of.

It also loses grip pretty quickly if it starts to rain, compared to a mountain bike tire that is built for that.

Road cyclists need to slow down when everything is less than ideal around them. It is tempting to always push the pace every single time, but there is something to be said for taking it very slow in a calculated approach.

This is especially true if on the road, because a slip could put a rider out in the middle of the street.

Road cyclists can get their bikes going very fast in the right situation. They are built to handle fast speeds, but a crash at a fast speed will be much more dangerous than going at a slower pace.

One way to start to comprehend the way crashes affect riders is to look up mishaps at the Tour de France. Even though it involves the fastest cyclists in the world tackling some pretty high elevations, they have had some nasty falls.

To make matters worse, cyclists are usually not wearing anything more than a helmet for protection. Riders are looking to stay as light as possible, so putting on padding is counterproductive.

The Dangers Of Mountain Biking

Running through the dangers of road biking might have some people ready to make a mountain bike purchase right now.

However, while there are some dangers for sure, the same can be said for mountain biking. Riders are always putting themselves at some level of risk when they are preparing to go out on the trail.

These risks are just a few of the main reasons it is more dangerous than road bikes in some situations.

The trails are always changing, the weather affects how the trail works, and so much more. Even if a person goes on the same trail weekly, they might find several differences that can make it unpredictable.

A mountain bike rider should always be ready for some type of surprise. They might hit a weird bump in the trail, or the traction changes out of nowhere.

There is really no coasting when off-road unless of course some type of pavement is discovered. With more unpredictability, there is a chance for crashes. 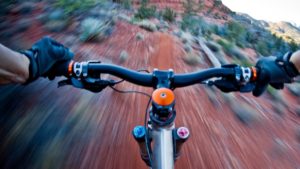 Natural obstacles are not the only unpredictable discoveries for mountain bike riders. There is also a chance of running into many different types of people outdoors using trails for different reasons.

The majority of mountain bike trails are used by hikers, people on a walk, and so much more. They can usually get out of the way with a little bit of nudging beforehand with a verbal warning, but there is always a chance of them clogging up the lane.

It is frustrating to deal with, and happens much more frequently than for road cyclists. Some paths have plenty of people on them, but they are usually straight enough and wide enough for easy passing while on a road bike.

There is no doubt that blindspots also frequently show up much more frequently for mountain bike riders than cyclists. A lot of this is due to the nature of trails.

For example, there might be no other solution than to force riders to make a sharp turn to get around a barrier. On the road, designers would try to avoid that ever happening.

A way to avoid blind spots is to scope out a trail before going on a ride and seeing any vulnerable areas. Also, slowing down as much as possible will keep everyone safe.

There is no telling what is coming around the other side, so why rush into it? 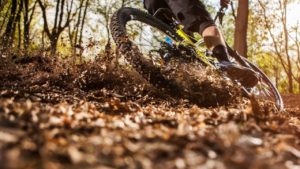 Road cyclists are much better at looking at the weather before they go on a ride. If they feel like weather conditions are not ideal, it is not uncommon to cancel plans. After all, if the roads are way too slick, the tires can start to lose control.

Mountain bike riders look at inclement weather as nothing more than a brand new challenge. While that is impressive to have that mindset, it is also important to keep in mind that this increases the chance of an accident occurring.

A lot of people who own a mountain bike love going out into the remote areas of the world and exploring as much as possible.

While it is fun to see new parts of the world and face unique challenges, being isolated from roads can keep a person pretty vulnerable if a major accident occurs.

It can take a long time for medical assistance to arrive on the scene if there is a major injury. In some instances, there might need to be a search party done just to find an individual riding by themselves.

It is never a situation that mountain bike riders want to think about, but there is the chance of that happening.

One way to help get around a bit is to ride in groups. Going on solo rides off the grid can be a recipe for disaster if stuck in a tough spot.

This can be beyond just an accident, as that could be an encounter with an animal, or trapped in a tough spot with no way of getting out.

Road cyclists might not want to admit it, but there is something very relaxing about coasting when the opportunity arises. This can allow people to relax and catch their breath a bit if they are feeling worn out.

Mountain bike riding can be very exhausting depending on the trail, and there is really no time to coast. When that happens, that means that athletes will be putting themselves at risk from a safety perspective.

Do not be afraid to take a break on the trail if it seems like it is too strenuous. There are a lot of people who do not want to because of the pride, but this can lead to greater issues if not treated properly.

Which One Is Safer? Mountain Biking, Or Road Cycling?

Simply put, a person can put themselves at considerable risk riding a road bike or a mountain bike. It really just depends on how safe a person wants to play it, and where they are located.

It is a bit of a cheat, but the safest type of riding is using a thicker mountain bike tire on a closed road bike path. This way, a rider has a little more support and stability with a bigger tire, and they do not have to worry about the unpredictability of what is underneath them.

Since that is not exactly ideal for the vast majority of riders, it is all about finding the right fit and discipline. Being smarter on the bike and looking out for some of the vulnerabilities can reduce the chances of any dangers occurring.

Riding will always involve that risk, but they are both safer activities than a lot of other sports. Be smart and plan things out, and fun will follow.