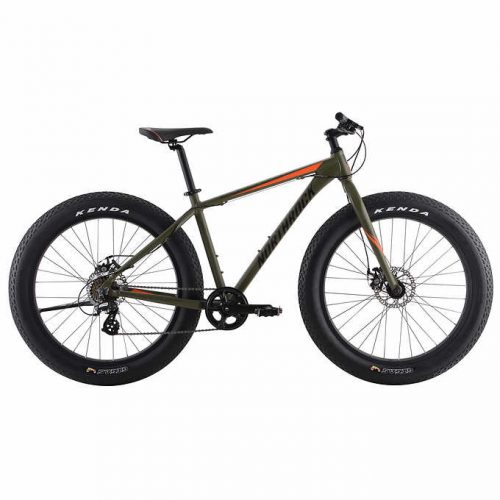 When people are first getting into riding a fat bike, they love exploring cheaper, entry-level models. It makes sense in a lot of ways to look at Costco as a place to buy something very reasonable. They pride themselves on affordable products, and they have some highly-rated bikes for the price.

The new Northrock xc00 is definitely grabbing attention from people who are looking to stay under budget on a new fat bike. Spending just a few hundred dollars on a bike seems like a steal, but how many sacrifices must a person make?

After getting a chance to try out the new bike in different scenarios, it is a bit of a mixed bag. Read on to learn how it performs.

Breaking Down The Features of the Northrock XC00

An inexpensive fat bike is not going to have killer features, nor should that be expected. At the same time they should be a little better than the previous model, and moving forward as technology gets better.

This latest release is an upgrade over the previous model from a few years ago, but at the same time, the same complaints still exist.

The frame is a pretty standard all aluminum alloy, used by a lot of manufacturers for being relatively light and responsive.

This bike feels a little heavy when riding, but it is hard to tell just how much of that comes from the frame itself. It is not all that bulky, but obviously, the material is a step down from a better model.

Using a Shimano Altus 7 Speed drivetrain allows for a fantastic shifting performance with this bike. It is one of the major selling features of something this inexpensive.

Even after extended use, it will work very well. They have been using some variation of this in the past on other Northrock bikes, so it makes sense to stick with what works.

The disc brakes on these fat bikes are adequate, at best. They get the job done relatively well, but nothing to the point that people should feel like they can stop on a dime at any time. For people who really want pinpoint stopping control, it is best to upgrade these brakes soon after purchase.

Durability wise, they probably need replacement at some point as well. It would be helpful to have better disc brakes by default on this bike, but for people who ride somewhat casually, they might be fine with the set up overall.

Kenda tires make a return for the Northrock, and they are once again getting pretty mixed reviews from the fat bike community.

The tires perform pretty well for casual use and on regular trails, but where they fall behind a bit is in the snow. They do not seem to navigate through the snow as well as other entry-level fat bike tires. If the goal is to purchase this bike to use in the snow consistently, it probably means getting another pair of tires to use at some point.

These tires might not perform well in the snow, but they certainly weigh as they would. It is tough to deal with the overall weight of this bike, especially when the tires aren’t helping cut it down. They feel like heavy-duty tires, just without the benefits.

The tires might seem pretty subpar, but what about the rims and hubs? There is not much positive to say about these as well. They feel pretty cheap overall, and that helps keep them light. Costco seems to focus on the light part, but it still doesn’t make that much of a difference considering the tires are heavy.

Since the tires are already heavy, it would be better for Costco to go with a strong set of rims and hubs. It would add some weight, but it is not like the bike is super lightweight anyway.

Riding the Bike for the First Time

After breaking down the main features of the fat bike, it might seem like Northrock is not exactly the top option to go with. Despite some negatives out of the gate, it is still worth giving it a full try to see how it performs on a pretty basic trail, and then a more challenging trail.

This seems to be the target audience for this bike in general. Right out of the store, the Northrock XC00 from Costco is very comfortable on flat, off-road terrain. The only thing a person needs to do to prepare themselves for using it the first time is to check the tire pressure and go with a low PSI to take advantage of extra cushioning.

As mentioned in the feature section, the shifters work very well. They won’t be needed that much on flat terrain, but it does help to power through a few tricky spots. For a ride that isn’t too challenging, this is a perfect option.

This is where the newest fat bike from Costco falls a little short. It just doesn’t deliver like some of the other entry-level options, not to mention the more expensive options that are out there as well.

The main issue really seems to be that the tires are just not built all that well for snow. They struggle with grip, are a little too heavy, and just feel really cheap. There is always the opportunity to upgrade, but then a person is no longer getting the same type of a great deal that they might be looking for.

Having solid traction when riding in the snow is essential for any fat bike rider. It is especially true for beginners because as soon as a person starts to lose that little bit of control, they feel very vulnerable. That can force a person to make some pretty rash decisions, and ultimately making matters worse.

Another performance issue is just that the bike feels a little clunky overall. It doesn’t cut through the snow like a lot of other bikes out there. The whole experience gets significantly worse when there is any bit of adversity on the trail.

It wasn’t all negative, as shifting still held up well, and it is a bit more comfortable than any other option they put out in the past. The tires absorb a lot of shock, and the standard seat that comes with the bike is very comfortable as well.

It should be realistic in today’s world that a fat bike is capable of handling a mild amount of snow at the very least. Especially in Canada, the majority of riders are going to experience this at some point. To have a fat bike that is limited and really unable to handle much snow significantly downgrades the value overall.

Maybe try this bike using a BIKE SKI! This would be a great option for a “budget” bike. Click the link for the review and pictures!

Who Should Consider Purchasing this Bike?

This bike is built mostly for people who look at bat bikes as a pretty basic form of transportation. Maybe they want to go on some trails here and there, but nothing too tricky. The components just aren’t built for anything more than that, which is why people will be stuck trying to upgrade too many things in the end if they want to extend its life.

Costco does a great job of offering a fat bike that has a low entry points, but people should be realistic about expectations. This isn’t going to keep up with bikes that cost thousands of dollars, nor should anyone expect that.

This fat bike works best as a true beginner option, or as a spare for more leisurely rides. No one should be counting on this to challenge themselves and go on a ride that is pretty long, hilly, icy, snowy, and more.

The price is going to entice a lot of people, because this is one of the cheapest new fat bikes a person can purchase. Keep in mind the limitations, and there will still be people who get good use out of this.

It is fairly easy to adjust to fit different sizes, so that is also a plus. The important thing is to not get into the tricky situation of making a purchase, and then spending hundreds of dollars on upgrades. At that point, it is best to go with a better option up front and save money in the end.