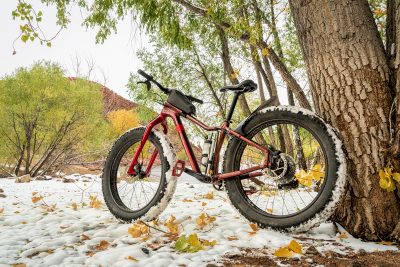 Tires are obviously an important part of any fat bike out there. People are willing to spend a lot of money on getting tires that they feel very comfortable riding on each and every day.

A lot of people who take that bike riding seriously have transitioned to studded tires to use on trails during the winter. There are added benefits to having studs on the tire, but is it overkill in some cases? There is a bit of a balancing act that most riders are trying to figure out as far as sticking with standard fat bike tires, or using studded options.

Studs or No Studs on a Fat Bike Tire?

Some people struggle with the decision. Depending on what type of riding a person enjoys and at what time of the year, a smart decision can be made by simply looking at the pros and cons of each. 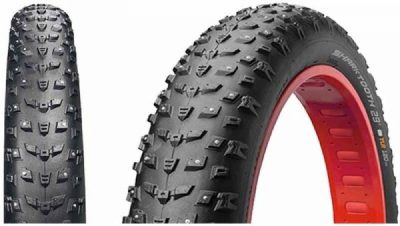 Those who have transitioned to studded fat bike tires and stuck with them are usually very devoted individuals. They will use their set of tires throughout the year, even in cases where they might not be completely necessary.

Most riders who use different trails will have different sets of tires, but if there is any snow on the ground whatsoever, studded tires go are attached to the bike no matter what.

Why do studded fat bike tires have such loyal fans? A few of the main selling points include:

The most obvious advantage to using studded fat bike tires is the enhanced grip. These tires are built specifically for the snow and ice that many people come across when riding in the winter.

There is nothing worse than going on a ride and coming across terrain that is not exactly stable. It can slow down a person who does not have studded tires, because they know that hitting a patch of ice could throw them off the bike.

Studded tires easily grip any type of surface in the winter, and can be used on other tough surfaces as well. They act a lot like cleats in football, soccer or baseball.

That added bit of stability allows people to ride faster, go on tougher trails, and just have a lot more confidence in general. To some people, that makes studded tires invaluable.

Studded fat bike tires will last a long time if used on the right surface. Most people will only use these tires in the winter, and the studs actually add additional life to the standard tire.

Instead of having to overwork on slippery surfaces, the studs do most of the heavy lifting to keep everything stable.

Make sure to always store them in a controlled environment when not in use. Otherwise, they will wear out a little more quickly, or possibly dry rot depending on the storage solution.

Without studded tires, people can feel a little limited on what they can and can’t do in certain weather conditions. Studded tires give people a pass to go on any trail they want without having to fear anything.

It’s a little bit more of an investment to get studded tires, but they do come in handy for those people who ride in tough conditions.

They might not make as much sense if a person rides on the same course, in the same weather, every single day, but studded tires open up a maximum amount of opportunity. 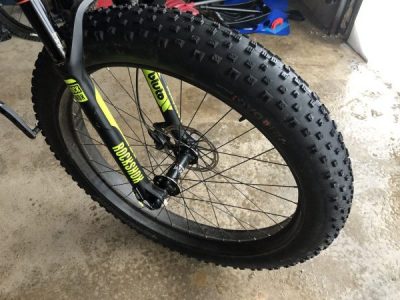 With so many people in love with studded fat bike tires, there is something to be said for standard options as well.

Even though they don’t have the same amount of grip as studded options, these are fat bike tires at the end of the day. They are still going to do a great job on most services, including soft snow.

They struggle on ice and other slippery surfaces, but some people don’t think that’s enough of a negative to switch. (Myself Included as of writing this. My mind could change after a good fall…Stay Tuned)

Those who stick with standard fat bike tires usually feel very confident about their choice. Why do people ultimately decide it is not worth going with a studded option? Here are a few reasons people stick by when making decisions.

Having hundreds and hundreds of studs on each tire is going to add weight to an already fairly heavy bike. Some people want a light, aerodynamic tire instead of one loaded with studs.

There might be an opportunity to go faster on a few surfaces with studded tires, but regular tires will go faster more often than not.

Tires without studs can glide on certain surfaces, while the winterized options dig in. Not everyone prefers that added resistance.

Investing in studded tires is a pretty big investment. Not only are people spending more money on tires with studs in them, but they usually still need another set of tires as well.

People may not have that type of money to throw around with their fat bike set up. If people had endless amounts of money, they might have tires set ups for any kind of trail. It is just not practical when people are on a budget to get studded tires to only use occasionally.

It’s not a huge hassle to switch out tires, but it does take a little bit of time. Some people like the idea of just grabbing their bike and going out at all times.

Once a person starts investing in new sets of tires for any situation, it becomes time-consuming to prep for every single ride.

To go along with time is the space issue as well. Again, an extra set of tires won’t take up a ton of space, but people who live in small homes might not have that type of storage around.

It is just one more thing taking up space, and maybe for only a few uses a year. 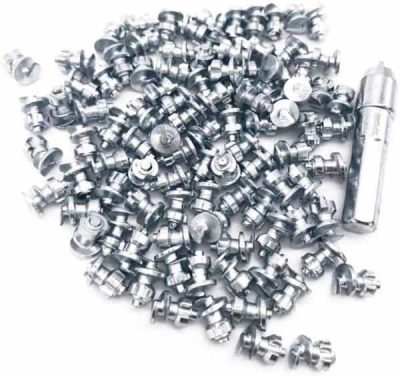 Still considering whether or not studded tires are worthy of the added investment? A few common questions are answered below for additional insight.

Is there any use for studded fat bike tires in the summer?

Although some people stand by the fact that started fat bike tires provide value on surfaces outside of the winter, most people will be fine without them. In fact, it’s recommended to stay away from studded fat bike tires in the summer, because it is only going to wear them out for when really needed in the winter.

This is why every person who invests in studded tires will also need to have a pair of quality standard fat bike tires as well.

It’s not so much a decision of which type to go with, as much as it is a decision on whether or not a set of studded tires should be purchased.

What to look for when investing in studded fat bike tires

Since investing in a standard option will cost money, the last thing a person wants to do is buy tires that are not durable. People should be looking for tires designed to stay sharp in the right areas.

Having the opportunity to replace studs that wear out or fall out is also a great option to have. Some people become very frustrated when they see so many studs fall out after a short amount of time, which is why people should always be doing checks here and there.

Understand that losing studs here and there is part of the riding experience. No tire is going to hold up and keep every single stud after hours of hours of riding.

Is the added safety noticeable?

Without studded tires, there are some riders who always have that fear of falling off in the back of their mind. Adding studs to the mix definitely helps out for people who might be struggling with any fear of falling while riding.

Of course, some riders don’t even brave going out in tough conditions. They struggle to find the need to brave the toughest conditions possible when riding. If the plan is to skip days with a lot of snow or ice on the ground, studded tires become even less of a need.

A final thought on tires

The decision on studded tires is pretty simple for people who are seasoned fat bike riders. Those who enjoy riding in the winter months more than anything else should definitely look into investing in a set of studded fat bike tires.

They will provide a lot of benefits, and it will be the only set needed for years to come as long as they are properly treated and stored.

For the casual rider, or the one who lives in mild or conditions, standard tires will do just fine. Don’t feel the pressure of investing in studded tires just because they are so popular.

It might be a better investment to go with an upgraded set of standard tires instead. Some people have noticed that an upgrade like that makes more financial sense, and the benefits are noticeable 12 months out of the year.