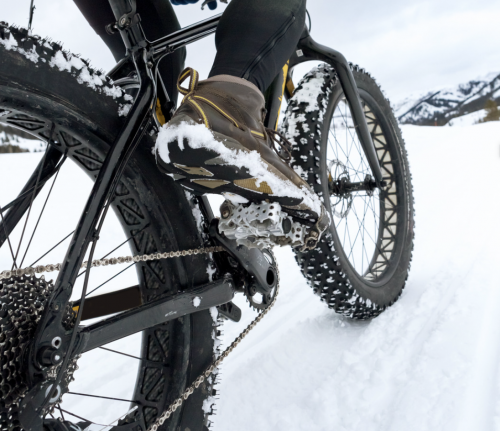 There are many different key components to every single fat bike to have it work the way it should. The bottom bracket on a fat bike is one that is not really thought of all that much, even though it plays a very big role.

Just how big of a role does a play in the functionality of a bike? Without a bottom bracket, it would be impossible to connect the crankset to the actual frame and allow the crankset to rotate freely.

What’s the Most Common Type of Bottom Bracket?

The vast majority of fat bike options will come with a three-piece bottom bracket. It is the preferred method for most modern bikes, and it means that the bottom bracket spindle is separated from the crank itself.

The crank ends up attaching to the spindle by using a square taper in most cases. It is simple, effective, low maintenance, and built to last a long time. For a long time, many different manufacturers have used some variation of this during their time.

Other options do exist, such as the one-piece, the Thompson, external bearings, and even a carbon crank bottom bracket. All of these are less common and provide slightly different setups in general.

The external bearings are on the rise, as they do help with some issues people complain about with a three-piece setup. In particular, they are slightly lighter, and the stiffness is much improved as well.

In the future, there could be a chance of external bearings being the biggest competitor to the three-piece options. Thompson will continue to fade away, and one-piece bottom bracket types are just too heavy to be mainstream.

They are mostly used only on budget models, and very rarely on fat bikes. It would be a little easier to get away with a heavy option since it is a fat bike, but most companies are going for a more premium set up to meet customer demand.

The right bottom bracket is necessary to get the job done when it comes to a fat bike. There are plenty of standard sizes out there, but fat bikes need their own special option. That means measuring not only the shell width but the spindle diameter so that everything is perfect.

Shell width is the first thing people should take a look at, especially since they have some specialty sizes specific for fat bikes. 121 mm and 131 mm are two popular options that come from fat bikes.

Generally speaking, the skinnier the tire, the smaller the shell width will be. Road bikes usually sit in the mid-80s as far as width is concerned. This makes it impossible to shop for any type of “one size fits all” option.

Just about every crank spindle comes in a diameter of 24 mm or 30 mm. Do not just guess, but either does an exact measurement or look at the instruction manual before making any changes. It is important to go this route because otherwise, it is going to throw off everything else. No matter how hard a person tries, it simply will not function the way it should.

How Much of a Difference do Bottom Brackets Make With a Fat Bike?

Even though bottom brackets are known to be pretty crucial for a fat bike, it is hard to find much of a difference between some of the top options out there. If the goal is to reduce as much friction as possible, they all perform at pretty solid levels, as long as they fit where they are supposed to go.

The differences come down to getting the perfect size. Aftermarket options are sometimes very frustrating, even if they are incredibly high quality. Find the exact fit instead of trying to make some type of compromise.

How Long Will a Bottom Bracket Last on a Fat Bike?

Bottom brackets are built to last for just about any bike out there, and fat bikes are no exception to that rule. As long as it goes through some routine maintenance and gets lube occasionally added, bottom brackets can last around 4000 miles before they start to show a little bit of age.

With that said, some people have 10,000 miles or more on their fat bike, and they have yet to replace their bottom bracket. It does not make that much difference unless it appears like it is severely damaged. Most people just forget about it until something goes terribly wrong, or they start to hear it making a little bit of noise. Speaking of which…

What Should a Person do if Their Bottom Bracket is Making a Lot of Noise?

Bottom brackets are usually pretty good as long as they get a little bit of lube once in a while. However, there can be cases where there is a noise coming from that area, so addressing it as quickly as possible is one way to get everything in order.

A creaking sound is usually something that is coming from a loose chainring bolt. As long as a person tighten those up first, they should notice that the creaking goes away. Very rarely is it actually come in from the bottom bracket, even though it appears that way.

How Much Does a Replacement Bottom Bracket Cost?

Fat bike bottom bracket can end up being pretty expensive since they need something that is particularly durable in any type of setting. Some people are pretty frustrated with that, but there is really no way around figuring some alternative out.

A high end, full replacement for a bottom bracket, is usually between $100 and $200. There might be some cheaper alternatives out there, but they typically force people to compromise a bit. Most people do not want to do any compromising, so that is why they will stick with something that is slightly more expensive.

Some will not even try to replace a bottom bracket by themselves, while others welcome the challenge. It might seem somewhat difficult, but the process is pretty straightforward if a person has general knowledge.